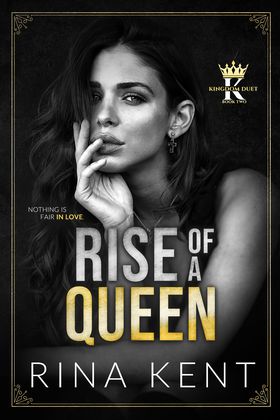 The King has found his Queen! Daddy King is a delicious, filthy tyrant, and I love him!!

Jonathan King is ruthless and will burn down the earth to get what he wants. He will also do whatever it takes to make sure Aurora stays safe. So when she disappears at the end of the first book we discover a new side to the King. (my heart’s all a flutter)

Aurora continually battles with her mental status, wondering if her mental stability is genetic and if what happened to her sister or worse her father is now happening to her. The need to escape is more desperate than ever before she does something that she can’t take back, but perhaps she’s already acted on these horrible impulses and she’d never know, is this what finally took her sister’s mind?

As the plot thickens in this second half of this duet, I was on the edge of my seat the entire time with the mystery surrounding not only Alicia’s death, but also the serial killer that is Aurora’s father. Between these two mysteries there are so many questions that I not only needed to be answered, but these questions had to potential to be connected. At the center of them both it kept circling back to Aurora and Jonathan.

As their relationship grows, could it all be a ruse to cover up a decade old mystery? Is the tyrant really a soulless murderer or is Aurora really guilty of the crimes so many accuse her of?

Rina is fantastic on keeping the plot moving and keeping you guessing until the very end. Rise of a Queen is everything fans will love of the overall Royal series and it is an excellent book!!

Nothing is fair in love.

This is my kingdom. My territory.
I own everything and control everyone, Aurora included.
She shouldn’t have barged into my world with no armour.
She shouldn’t have caught my attention with no warning.
Alas, she did.
Then she thought she could disappear.
If a battle is what it’ll take to protect and own her, I’ll shed blood.
Wars aren’t fair, and neither am I.

Rise of a Queen is the second part of a duet and is not standalone.

I thought he was the white knight. Looking back, it makes sense. I was young and needed saving. Luca was my strength. He could take on anything—the world, for me. They say first love cuts the deepest. Ours became a blade that bled me out. It turns out I didn’t know a villain when he held my heart in his hands. Now it’s darker—more like his.

Elise was my whole world—until my world burned, and I destroyed her with me. Some betrayals, you can’t undo, no matter how much you wish you could. I can’t help who I am now, and why would I want to? I run this city. No one’s going to take me down—not even the Manhattan District Attorney’s office. I heard they’ve got a file eight inches thick on Don Galante. But dodging bullets is my business. They play dirty, but there’s no one dirtier than me.

The DA learns the hard way who’s in charge; he’s out. It should be time for celebration. There’s just one problem: his heir. Or should I say heiress? Elise O’Hara wears a crown of lies, a gown of red, and a fat diamond on her left hand. Now it’s me and her. Or her and me. Only one of us will be left standing when the story’s over.

This is how you write a tragedy.


PRAISE FOR THE DARK HEART DUET

“Ella James’ storytelling is something absolutely phenomenal and it’s unlike any author I have ever read. The storyline is a fascinating mix of drama, tension, secrets, accidents, and twists. Dark Heart was captivating and addictive from the first page. It was a mind-blowing collage of angst, sweetness and suspense. Be ready to get your heart shattered but trust me, it will be a breathtaking experience.” – PP’s Bookshelf

Ella James is the USA Today and Amazon Top 10 bestselling author of more than twenty novels. She writes emotional, hard-won love stories with steam, suspense, and Kindle-throwing twists. She lives in Colorado with her husband, three young children, and hyperactive dog.

To connect with Ella, sign up for her newsletter at https://www.subscribepage.com/EllaJamesNews and join her reader group on Facebook: https://www.facebook.com/groups/EllasEliteTeam. Questions or comments? Tweet her at author_ellaj or e-mail her at ellafjames@gmail.com.

BLURB
I was never supposed to want to keep her.
She was meant to be borrowed.
Mine for six days and not a day longer.
She doesn’t belong to me.
She belongs to someone else.

The closest person I have outside of the screaming fans and paparazzi—a constant in my new life— other than the whiskey I drown myself in to numb the pain left by someone else.

But a secluded cabin in the woods and my ex who decided she’s not over me forces me to go to the extreme in order to take control of my world again before I lose it completely.

Unfortunately for me, my brother’s girlfriend is the only girl I haven’t slept with and made fall for me, resulting in hating me in the end.

She’s my only option.

Sharing a room in a cabin with me is most girls’ dream come true, but for Natalie, she claims it’s her worst nightmare. She thinks I’m a cocky bastard and has always been good at destroying my ego.

I never realized when I asked to borrow her for the trip, that I’d feel something I haven’t felt in a long time, or that I’d like the way she pretends she doesn’t enjoy being around me.

Have you ever borrowed something and didn’t want to give it back?

Yeah, well, me too. And I’m starting to think she should have been mine to begin with…


SEE ALL THE NOVEMBER RELEASES HERE:http://www.cockyheroclub.com

Victoria Ashley grew up in Illinois and has had a passion for reading for as long as she can remember. After finding a reading app where it allowed readers to upload their own stories, she gave it a shot and writing became her passion.

She lives for a good romance book with bad boys that are just highly misunderstood. When she’s not reading or writing about bad boys, you can find her watching her favorite shows.

I was supposed to be starting a new life.

But, fate had something else in mind.

I was in my senior year of college and had just started a new job at Morgan Financial Holdings and I was bound and determined to get my foot in the door of the business world. I refused to ask my Uncle Hollis for more help. He had given up his life to take care of me, no way was I going to ask him for anything else.

However, my new professor, Declan Berkshire, just happened to be a huge cocky jerk. As the heir to a real estate franchise, he was both rich and a celebrity– and truth be told, the hottest guy I had ever met.

He also happened to be a client at Morgan Financial Holdings. Just my luck, right?

While I tried to keep a safe distance from Declan, he was finding every way possible to get my attention.

We both knew it was wrong to fall into a relationship. He is my professor and I had way too much to lose if anyone were to find out, but we just couldn’t help ourselves.

Then, we became front-page news.

Fearing I may have to drop my last class before earning my degree, I tried to end my relationship with Declan. Refusing to give me up, Declan fought for us when I didn’t think it was possible.

With so much on the line, Declan made one of the most difficult decisions and one that led us to our own magical romance. But, it hasn’t been easy and someone is out to stop us from getting our happily ever after.


SEE ALL THE NOVEMBER RELEASES HERE:http://www.cockyheroclub.com

M.A. Lee is the persona of a wife, mother, and coffee addict. Her love for writing began as a child and has flourished into a career as she fell in love with classic romance stories, but wanted to put her own twist on the ‘book boyfriend’ idea. You can find M.A. Lee enjoying time with her husband, kids, and dogs at her country home in Kentucky or at her many book signing events.