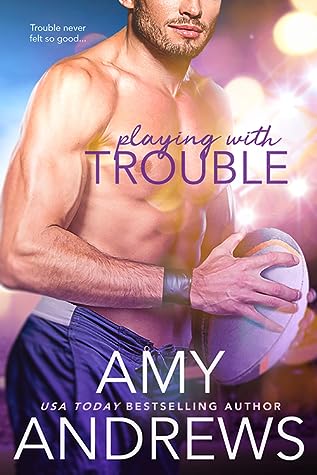 Playing With Trouble
(An interconnected standalone)

My goodness I loved this book!! It shouldn’t be shocking because I love Amy Andrews and returning to Credence is one of my favorite things, but Playing With Trouble was jammed packed with fun!!

Finn, Finn, Finn, I fell head over heels in love with the four year old in this book!! He is full of life, full of questions, full of so much joy…oh my heart…I am over the moon for the precocious bundle of energy. He is exactly the medicine Cole needed to heal his downtrodden spirits, while being the glue to bring his mother, Jane, and Cole together in this adorable love story.

When Cole boarded a plane to travel around the world from Australia to the US to escape the scrutiny he was under from his injuries and dying career in rugby, he never imagined finding the balm in a single mother and four year old boy. His life had been his career and he’s never given any thought to a family or a long term relationship, but now that he’s had a moment to slow down and spend time with Finn and Jane, he’s reevaluating some things and being in charge of someone besides of himself, he’s discovering, isn’t quite as bad as he originally thought.

As a single working mother, Jane never gets a free moment to herself, especially when her son has the energy of five children, or at least it seems that way it seems sometimes. When she not only ends up with an unexpected house guest, but her ex flakes on taking their son during her newest house renovation, she is strapped with two extra people. Not that she considers her son a weight, but she didn’t have him factored into her timetable when she quoted the renovation and four year olds aren’t exactly safe all day in a home remodeling project.

When Cole offers to watch Finn while Jane works, as much as she hates imposing on a stranger, Finn loves the idea of hanging out with the huge rugby star, and while it allows her to get her work done safely and during the day (instead of working long into the night while he sleeps), it now allows Jane time to get to know her unexpected house guest who is watching her son and staring in her dreams, so it is a win-win.

While it’s a slow burn for them to really get to know one another, while it appears easier when Finn is around, you see they have an easy camaraderie when they talk about their careers or spend time together. No matter when it is, that underlying passion is always brewing between them and once they do give in it it explodes between them.

Some of the best moments to enjoy in this book are when Cole is Finn’s manny, especially during the rugby clinic. I was laughing so hard, I seriously went back and read those passages again and again just so I could laugh multiple times. Finn is by far one of the best child characters I’ve had the joy of reading in a long time, it’s easy to see why Cole fell in love with both him and Jane so easily.

Australian rugby pro Cole Hauser has had enough of speculations about his future post-injury. So when a football buddy puts his house in America at Cole’s disposal, he jumps at the chance for some peace and anonymity. The plan is perfect—until he discovers he’s roomies with a woman who knows how to wield a nail gun and her kid. Awesome. Not.

Single mom Jane Spencer is supposed to be spending four weeks alone in the wilds of Colorado rehabbing a house that’ll put her business on the map. Instead, her time is overrun by her four-year-old and a grumpy, too-sexy rugby dude whose only goals are to watch ESPN and brood. Awesome. Not.

When, surprisingly, McHottie offers to get his ass off the couch and help Jane out with Finn, she’s hesitant. But before she knows it, Cole is knee-deep in kid activities during the day and they’re both fighting their simmering attraction at night.

Anything between them can only be temporary – their time together is short and Cole lives on the other side of the planet. It should be easy to say goodbye, right? Wrong. It doesn’t take long for them to realize they’ve borrowed a whole lot of trouble.

But trouble never felt this good. 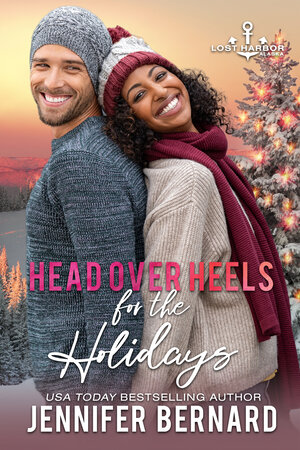 Head Over Heels for the Holidays; Lost Harbor, Alaska #7
(A standalone within a series)

Maya Badger – yes!! We finally have the police chiefs story and it was perfect for the woman who protect and serves the residents of Lost Harbor, Alaska.

Maya has been the stoic background hero who always follows the rules  and never lets her weaknesses show. Waiting for her story has been a joy and also agony. Who would be the man to bring the police chief to her knees because nothing seems to phase Maya Badger. Reading Maya’s story and learning more about her background we come to find out that, yes, she always has been an overachiever and that is no surprise, but underneath the hard exterior is a girly-girl who may just have been waiting for her Prince Charming, or her naughty nurse, to arrive in Lost Harbor when the holiday season was right.

Rune Larsen and his sister Cara have been on the run for the past couple years trying to outrun a stalker that has been making Cara’s life very unpleasant. When a home healthcare nurse opening becomes available for one Harris Badger, Rune recognizes the name from his childhood and jumps at the opportunity. The fact that it’s listed in Alaska is also a huge plus to stay ahead of the stalker. When they step into town and he meets the police chief, Maya, it’s a huge sigh of relief that it’s his childhood friend is on the side of the law and for the first time in a long time that he feels somewhat safe. Not only is he happy to see his old friend, but something else is stirring inside that could be considered more and it has nothing to do with the holiday spirit.

Rune and Maya are able to rekindle not only their old friendship, but new sparks are flying as they began a relationship as adults. While both of them agree to embark into something light for the holiday season, it doesn’t take long for their attraction to deepen into something more. While they both know Rune could leave at any moment if the stalker appears, it’s hard to evade the fall.

Rune’s lighthearted jokes about the holiday happenings in Lost Harbor was fun and super enjoyable, while Maya finding her joy for the holidays again was very uplifting. If you are looking for either a holiday boost or ideas for your own holiday party Head Over Heels for the Holidays will give you both.

Also in case you were wondering, the mystery surrounding Lost Harbor and Maggie, formerly known as S.G. or Spruce Goose, is still intermixed throughout the storyline, but I don’t want to give the plot away – it’s just too good. Maya has been an integral part of helping Maggie since the beginning and you don’t think Jennifer would let that just fall by the wayside, no way. So plan on this holiday season being filled with lots of love, cookies, tinsel, and an old mystery.

Ever since her ex-boyfriend dumped her on Christmas Eve, the holiday season has been tough for Maya Badger—especially since Lost Harbor, Alaska pulls out all the stops for the holidays. Sure, she could focus on her police work and her father’s recovery from heart surgery. But when her dad’s home healthcare nurse turns out to be her childhood buddy—all grown up and the stuff of her naughtiest fantasies—she may have a solution to her holiday blues. After all, Jay-Jay always was the perfect playmate!

Rune Larsen hasn’t been skinny little Jay-Jay in a long time…not since he and his teen sister were forced to change their names to avoid Cara’s stalker. Taking a job in tiny, remote Lost Harbor seems like the perfect way to stay one step ahead of danger. The fact that his childhood friend is the town police chief is a bonus. Not to mention the fact that Maya has grown into a beautiful bronze goddess. Hell, even her serious cop side is a turn-on…though he’s up for the challenge of bringing some fun back into her life.

In fact, if they can navigate a stalker, a runaway yak, eleventy-billion holiday parties and a criminal investigation into the dark side of Lost Souls Wilderness, Rune just may convince Maya to fall head over heels for the holidays…and beyond.