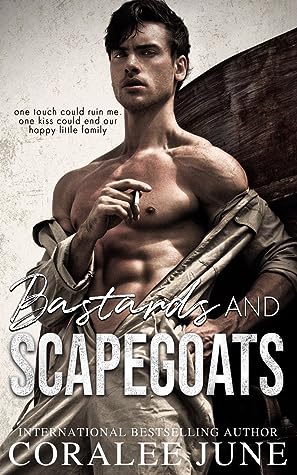 Bastards and Scapegoats; Twisted Legacy #1
(#1 of a duet)

Corealee June is a wicked mastermind in this twisted duet! It’s a perfect whirlwind of emotions of who to trust, who to believe, and Hamilton’s dirty, dirty mouth.

While Vera and her mother come from a very humble background, her mother has now married into the Governor’s family, which means living in a media spotlight and having strangers dig into your personal life. This leads to an entire story of Vera walking a sharp edge of who to trust in this new world her mother has just thrown her into. No lifevest, no one is coming to her rescue, and the sharks are circling.

While Vera has worked hard to be the perfect child her entire life, she suddenly finds herself thrown to the sharks, namely Hamilton, and for the first time in her life making decisions based on wants and desires vs. her mother’s needs.

Vera is continually torn in her new world in who to trust, it’s only ever been her and her mother and this world of elite is nothing like she’s experienced before.

Bastards and Scapegoats is so intoxicating and so darn good, it will draw you in and keep you guessing and also have you tripping all over Hamilton’s dirty, filthy talk.

The first time I saw Hamilton, he was balls deep in one of the bridesmaids at my mother’s wedding.

He was lethal. Handsome. Cruel. Twisted.

I was drawn to him like fists to glass. We had an angry sort of relationship. There was nothing kind about the broken man that stole my heart and crushed it in his fist. He was all sharp edges. One touch could ruin me. One kiss could end our happy little family.

Hamilton escaped with scars to his name and a ruined reputation. And now? I wanted out, too. I guess the scandal of our relationship was the least of our family’s problems.