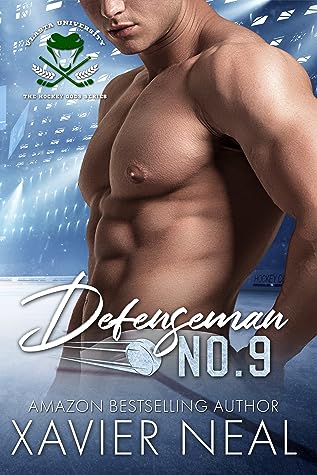 Defenseman No. 9; The Hockey Gods #4
(A standalone within a series)

Xavier Neal is a new author for me and while this is the fourth book in the series, I had mixed feelings while reading this particular book.

As far as the story between the two main characters, Hugo and Crash, when the main focus of the story was between them, I really enjoyed how they connected and their love story played out.

Hugo is the defenseman both on the ice and has natural instincts to defend and protect everyone in his life off the ice as well. When his friendship with his long time friend, Crash, develops into something more, his natural instincts to protect Crash from everyone and everything, even his own feelings. It also allows Crash to take advantage of their long time friendship when Hugo doesn’t know how to express his feelings.

Navigating their new found roles from friends to lovers takes a new skill set and they both have to work at it, but it’s something that Crash has never had to do. While he loves Hugo as a friend, loving someone as more is something he’s never done.

Again, I loved watching these two men figure out their feelings for each other, so the part that I had mixed feelings over was the continual insertion of outside forces. I typically love quirky secondary characters, but this book was flooded with them which left too much time in between Hugo and Crash time. This is my opinion and doesn’t reflect the author’s writing in any way, it is just a preference of mine.

If you love hockey and you love two men finding their love for one another, then Defensemen No. 9 might be for you.

*Please note that this will be an M/M novel

1 thought on “Review – Defenseman No. 9 by Xavier Neal”