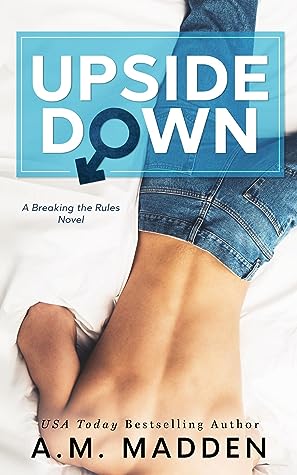 Upside Down; Breaking the Rules #3
(A standalone within a series)

I was so torn up over this book. The hopeless romantic vs. the practical person kept having a battle in my head and overall I was fighting for the love between these two men.

Cooper is twenty-eight and has only dated women his entire life, but with each failed relationship he knows something is missing he just doesn’t know what. He was a hopeless romantic, but mostly he just felt hopeless as he continued to fail at love. Then one drunken night when he kisses Ricky (his sister’s best friend), he could chalk that moment up as a drunken mistake, but when weeks pass and he can’t stop thinking about it he knows he can’t pass it off as a drunken mistake.

The decision to pursue a relationship with Ricky didn’t come easy, especially when he didn’t like labels associated with the changes and emotions he was going through and the box society wanted to put him in, especially after twenty-eight years of being attracted to women Cooper knew his attraction to Ricky wasn’t going away. It was powerful and something he’d never experienced before. He knew he wanted to pursue that connection more to see where it would go. That hopeful romantic knew what he wanted and he wanted Ricky.

Ricky was practical and had a tendency to self-sabotage his relationships. Years ago his first ever chance at love was with a man who wasn’t out of the closet and Ricky still bore the scars of it, so he wasn’t looking for a repeat in Cooper who was just beginning his journey out of the closet only to decide to duck back inside again. However, Cooper was tenacious and with each encounter was working his way under Ricky’s skin.

The practical side of my brain was totally on Ricky’s side. I understood why he didn’t want to invest in Cooper if Cooper wasn’t going to stick around for the long haul, however, when Cooper was being upfront and laying himself bare, the romantic in me had a hard time staying in the Ricky camp because….hello….it’s love.

I continually waffled back and forth between my two sides, which made for a wonderfully told story. Top that off with some steamy scenes and Upside Down was a great book.

From USA Today bestselling author A. M. Madden comes a stand-alone about one man’s awakening to all-new desires—and to a life-altering romance.

I’ve always been known as the hopeless romantic … the nice guy … the sweetheart.

Everything in my life supported this persona. My students loved my easy personality. My colleagues admired the way I handled myself in the classroom.

But something was always missing.

Like so many relationships before it, my current attempt at love felt like a dead end. When she gave me an ultimatum, I couldn’t promise to give her what she wanted.

So, she ended it.

Explaining another breakup to my family was the last thing I wanted. But doing it on a luxury yacht at my brother’s wedding lessened the hardship.

K. Webster and Misty Walker have revealed the covers for their upcoming releases, Sheriff’s Secret and Kian’s Focus!

When you’re the sheriff of Brigs Ferry Bay, certain things are expected of you.
Marry a local girl, settle down, have a few kids. You know, the small-town dream.
But I’ve got a secret I’m terrified will get out.

I’m gay.
Not bi. Not curious. Not confused.
Just gay.
So, settling for that dream won’t be happening.

If this secret gets out, the people I serve and protect, especially my father, won’t be accepting.

I’m not brave like my high school sweetheart, Kian.
The day he came out was the day I had to let him go, and with it, love.

I’ve done a great job of pretending I’m perfectly fine being single. Until a villainous and annoyingly charming new B&B owner, Dante Kincaid, rolls into town. The spark between us is electric and undeniable. He wants to give me a taste of what he has to offer, and better yet, he vows to be discreet. I’m too selfish to refuse.

But my secret is still a heavy burden, leaving me handcuffed to expectations and unable to fully grasp what I want—him. History has a way of repeating itself, but this time around, with Dante, it’ll hurt a lot worse.

I lost my boyfriend on the night I had planned to propose.
It was a horrific accident that was all my fault.
I gave up and resigned myself into a life of obscurity.

Until I got a call that my sister, Sara, needed me.
It gave me purpose and I ran to her rescue.
Because that’s what I’ve done our whole lives.

That’s how I ended up in Brigs Ferry Bay.
But when I showed up, things were so much worse than I thought.
She was sullen, fragile, and sinking into a depression I didn’t know how I’d get her out of.
Together, we were drowning.

Until I met Kian.
He’s everything I’m not.
Bouncy, bubbly, full of life, and an innate ability to make everything better.
He makes me believe I can be happy again.

Now the unthinkable has happened and Sara is on the verge of losing her life.
Once again, it’s all my fault.
Kian had clouded my vision with promises of hope and forever.
I was so stupid to believe I could be happy again.

I try push him away.
To shove him out of the darkness that follows me.
I don’t want him to suffer the future fate had secured me to.
But Kian’s focus is on me
And he’s used to getting what he wants.

While each book can be read as a standalone, to get the full experience, they’re best read in order. Enemies to lovers, hurt comfort, age-gap romance, and so much more.

K Webster is a USA Today Bestselling author. Her titles have claimed many bestseller tags in numerous categories, are translated in multiple languages, and have been adapted into audiobooks. She lives in “Tornado Alley” with her husband, two children, and her baby dog named Blue. When she’s not writing, she’s reading, drinking copious amounts of coffee, and researching aliens.

Misty Walker is fueled by coffee and motivated by the forceful voices in her head screaming to tell their story. If she’s not reading or writing, she’s spending time with her daughters, husband, and two dogs. But mostly she’s reading or writing.

Playing with Trouble by Amy Andrews is now live!

Australian rugby pro Cole Hauser has had enough of speculations about his future post-injury. So when a football buddy puts his house in America at Cole’s disposal, he jumps at the chance for some peace and anonymity. The plan is perfect–until he discovers he’s roomies with a woman who knows how to wield a nail gun and her kid. Awesome. Not.

Single mom Jane Spencer is supposed to be spending four weeks alone in the wilds of Colorado rehabbing a house that’ll put her business on the map. Instead, her time is overrun by her four-year-old and a grumpy, too-sexy rugby dude whose only goals are to watch ESPN and brood. Awesome. Not.

When, surprisingly, McHottie offers to get his ass off the couch and help Jane out with Finn, she’s hesitant. But before she knows it, Cole is knee-deep in kid activities during the day and they’re both fighting their simmering attraction at night.

Anything between them can only be temporary – their time together is short and Cole lives on the other side of the planet. It should be easy to say goodbye, right? Wrong. It doesn’t take long for them to realize they’ve borrowed a whole lot of trouble.

But trouble never felt this good.

Amy Andrews is an award-winning, USA Today best-selling Aussie author who has published 70 plus contemporary romances. She loves to make her readers laugh, tingle and sigh and believes in snort laughing, snot crying, multiple orgasms, mighty wangs and HEA’s.  She also loves frequent travel, good books and great booze although she’ll drink mediocre booze if there’s nothing else.
She lives by the sea with her husband of thirty years where she consumes pina coladas from her deck every afternoon whilst staring at the ocean.