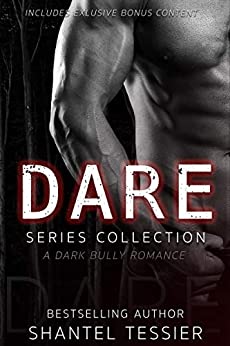 Having all of the Dare books in one set is the BEST!! All three books are interconnected and binge reading will totally happen because you’ll be hooked like I was!

This series is dark, dark, oh…and did I mention it’s dark, but I dare you to read this dark, bully romance with both eyes open and without biting your nails right off.

Shantel pulled out all of the stops and went full speed ahead in this high stakes series. She doesn’t let off the gas the entire time. I imagine her giggling while she throws you into the deep end while you swim with the sharks.

In I Dare You, Austin and Cole are make no room for apologies in their “relationship” and are absolutely made for one another. Both are headstrong, ruthless, and want what they want. They are the ultimate power couple, each holding dark secrets, but keeping the biggest one to themselves. The one that could ultimately be their demise.

In I Promise You, we get multiple POV as we dive deeper into the GWS and more importantly into Cole’s head as we look back as his POV over the events that lead us to the night everything fell apart. It also gives us the starting point for their life in college and where we move forward in If You Dare.

If You Dare may be Deke’s story, but once again we get multiple POV’s. I love this aspect because it leaves you wondering who is behind the threats, who will still be alive at the end of the book, and who is still loyal to the GWS. There are surprises and twists and a whopper of an ending.

This box set includes extras that you wouldn’t have with just the single books and they are juicy extras you will want to read.

The sharks are back! The Dare Series Box Set releases on December 11th and you can preorder your copy now! The box set includes three full-size novels – I Dare You, I Promise You, and If You Dare – along with exclusive bonus content and a brand new cover.

Are you ready to swim with the sharks?

What do you do when the devil has you in his sights?
You show him that you can play his game.
Austin Lowes is new to town. She’s running from a mom who hates her to her dad who cares nothing about her. Only a few months and she will be free, or at least, that’s what she hopes … until she meets him.
Cole Reynolds is the devil disguised as a man. He wants her fear, he wants her blood, and he wants her soul.
Just a little game, he says, I dare you.
Will Austin survive him, or will she lose herself and the game?
Secrets are revealed and justice will be served, but at what cost?
Who survives and who doesn’t?

It was supposed to be a game.
I Dare You.
We bought her in ’cause I wanted to play with her.
Destroy her.
But plans change and she got caught in the cross fire.
Then I did something far worse. I fell in love with her, but she doesn’t know I still have secrets.
Ones that could rip us all apart.
We’re sharks.
Raised to hunt and kill.
We take what we want without asking.
We’ve never needed permission before, so I’m not about to start now.
You think you know everything, but we’re about to do what we do best and prove you wrong- I Promise You!

The game was over. The dares were getting old, and the secrets were piling up faster than the bodies.
But someone had other plans. They wanted to play a new game.
Becky Holt was the love of his life until he found out what she was hiding. Now he wants to seek his revenge in the most daring way.
Deke Biggs has always been a shark. He’s not afraid to kill, and he’s about to become her worst nightmare.
But there’s a new player, and she plans on taking everything, no matter what the cost.
Try to beat him- If You Dare!
Who will win and who will lose?

Due to mature content and themes this series is recommended for readers aged eighteen and over. The Dare Series Collection has over 400K words and includes exclusive bonus content. The Dare Series is a dark bully romance set in high school and in college.