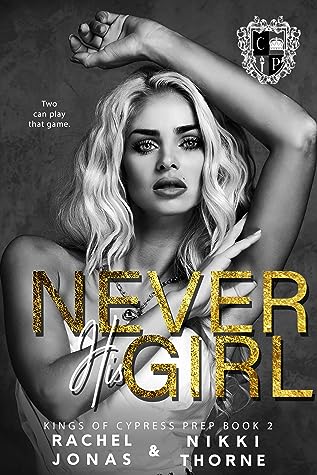 Never His Girl; Kings of Cypress Prep #2
(#2 within a series)

by: Rachel Jonas and Nikki Thorne

Floored, stunned, and emotionally all over the place. Never His Girl is twisty with turns down avenues I did not expect and with a Golden boy I was not prepared for.

If you were raging after The Golden Boys, the fallout from that cliffhanger lingers. A mistake that West realizes he made, is not something easy to come back from and Blue is shredded from the devastation.

I love that we see what that horrible mistake does to West’s life. It’s not quite the crushing, overwhelming blow that it is to Blue’s life, but there is still fallout and West has to hold the pieces of his own life together while fixing the fragile threads of what he wants with Blue.

Blue’s life is falling apart piece by piece and West Golden is just one huge piece of what’s gone wrong in her life. Just when she thought she could trust him he proved her horribly wrong. Now he can vanish, the only problem with that plan is he won’t leave her alone. Not everything is fixable, but he shows up around every corner. Who will give in first? West and Blue have both proven they are nothing if not stubborn and strong willed.

Never His Girl is full of emotions, a mystery that has layers of wickedness, and ends on a cliffhanger that will leave your mouth hanging wide open.

This series has certainly pulled me in and made me ache for the final installment. I love not only Blue and West, but I want to know more about the other Golden boys, Blue’s friends and family. I hope we get more of this world once Blue and West find their HEA. I’m hooked. 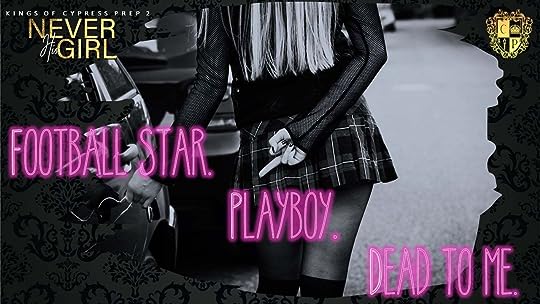 Nothing puts the final bullet in a girl’s rep like a leaked sex tape. Especially one starring her and the cocky quarterback who’s had it out for her since day one. Yep, you guessed it. That girl is me.

At Cypress Prep, West is king, but all I see when I look at him is the wicked prick who gets off on trying to break me.

Go ahead. Give him a round of applause for winning that last round, but know this–hell hath no fury like a girl from the south side with a baseball bat.

Hurt me once, shame on you. Hurt me twice… over my dead body.
***
NEVER HIS GIRL is the highly anticipated continuation of the KINGS OF CYPRESS PREP series. This is book two in a trilogy and should only be read after completing book one, THE GOLDEN BOYS.

This saga contains strong bully themes. So, if you’re not into romances where hate turns into love (… eventually), and if you don’t like your heroes of the unapologetically alpha variety, this might not be the series for you. There is no rape or dubious consent whatsoever. However, due to adult themes and sexual situations, this one’s only for the 18+ crowd.

This series is sure to give you GOSSIP GIRL and ONE TREE HILL vibes, and the angst will have you burning through the pages to find out what happens next. One-click and get lost in this series today!
Smooches,
RJ & NT