Four lives have been intertwined for years dating back to a trip to Paris. When Holly and London were teenage girls visiting the city of love, Holly met Elijah and her life changed forever. Neither knew that years later their lives would take the turns it did, but even given their horrific circumstances neither would ever take it back, for even given the small window they had they knew a powerful love.

Silver Lining is told from multiple POV’s. While Holly and Elijah have reached a tipping point in their lives; Holly has been shot and Elijah doesn’t know if he’s able to save her from her gunshot wounds or from the threat closing in even if she survives. She shot a US Colonel, even if he was dirty, and there is no escaping what the military will do to her. Love doesn’t save every situation and Elijah knows there will be no happy ending for them.

Elijah has proven again and again what an amazing hero he is throughout this series. Yes, he’s alpha to the extreme, but he has to be to endure what the military has put him through. His inner alpha beast certainly calls to Holly and these two are hot in every instance they spend together. I love that she’s just as territorial about him as he is about her. Which brings us to Adam, the one man who really brings out Elijah’s inner beast when it comes to Holly.

When we last saw Adam, Elijah had left him with a bullet wound in his side and London was trying to get her life in order after detoxing. These two are a mess, but somehow their mess works when they are focused on each other. I love that these two have come full circle and had a chance at redemption knowing a very different ending could have come about for both of them. I’d love to see a more in depth story between these two, but that is hopefully wishing.

This entire trilogy is high action, high heat, and super high intensity. It’s one you don’t want to miss. 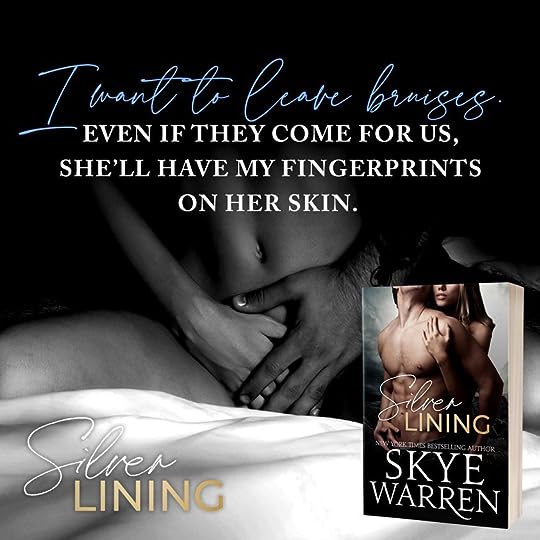 Elijah North has survived starvation and torture. Now he faces his darkest challenge: the possibility of life without Holly Frank. The woman he loves hangs in the balance. The family he found mourns in the distance. And the future he built crumbles in the wind.

SILVER LINING is the final book in Elijah and Holly’s story!