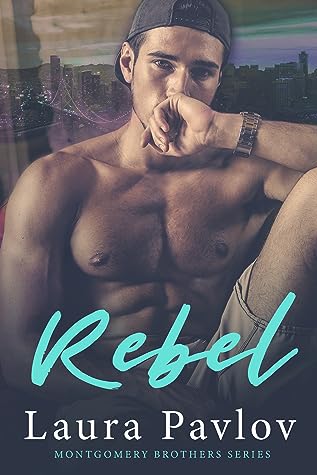 Rebel; Montgomery Brothers #3
(A standalone within a series)

A totally adorable fake boyfriend, enemy-to-lover romance. Laura Pavlov is a new author to me and I’m in love with her writing.

Everyone loves Jack Montgomery, everyone except Monroe Buckley that is. She’s the little sister of his best friend which means she’s completely off limits, but somehow his hormones won’t take the memo. The fire she throws back at him on a daily basis just does it for him and he wants to win her over, or maybe he just wants her fire. He isn’t sure, except at the end of the day he really can’t have her because she’s his best friends little sister. Off. Limits.

Monroe used to have a crush on Jack, years ago, but that ended when he showed her his manwhore ways. As the most eligible bachelor in town he is never hard up for a date, so as much as he irritates her, when a picture of them goes viral, she hates that she has to use him as a fake boyfriend to save their jobs. More than that, she hates that she likes being his fake girlfriend. Nothing can come from it, he was her brother’s best friend first which means he’ll never be hers.

Their chemistry is through the roof and the more time they spend together the more they realize their fake relationship might not be so fake. If only they didn’t have so many obstacles to jump over, perhaps they could be something real.

I loved Jack so much. He is so self deprecating and light hearted, I was snickering through the entire book with his antics. He is also madly in love with his family, which is endearing, especially when his nieces are born…sigh…he’s the best uncle.

Monroe is a bit intense at times, but it works so well with Jack’s laid back attitude, they balanced each other out. I think if she eased off, their relationship wouldn’t have worked as well as it did. She actually takes all the sarcasm and jokes from everyone in her life really well, which also helped smooth out her hard edges.

Rebel is adorable with chemistry through the roof and great secondary characters. A must read.

Jack
I’m always down for a good time. I’m that guy.
I love women. I love sex. And I love my life.
Go big or go home, right?
My father’s death is a constant reminder of why I like to keep it simple.
Life is short.
Emotional attachments make you weak.
Grieving sucks. And I have no interest in caring deeply for anyone outside of my family.
I’m not looking for complications.
Monroe Buckley is a complication.
She’s driven.
She’s focused.
And she’s my best friend’s little sister.
Not happening.
But once we’re forced to spend time together…I only want more.
Too bad she’s the one woman who is off-limits.

MONROE
I don’t trust most people, and I have my reasons.
I’m passionate about my work, and I came here to do a job.
Not date the boss.
Getting hired at the top media company in the city is the break of my life.
But it means working for Jack Montgomery.
My one-time crush.
My brother’s best friend.
And the current thorn in my side.
He’s exactly what I want to avoid.
Yet he’s everywhere I turn. Even when he’s not there—he’s in my head.
He’s a magnet for attention.
A heartbreak just waiting to happen.
And my heart is something I fiercely protect. At all costs.
They say the heart wants what the heart wants…
But my heart isn’t allowed to make that decision anymore.
There’s too much to lose.

Rebel is now available for Pre-Order! The final book in the Montgomery Brothers Series releases on January 5th.
Pre-Order REBEL Here: https://amzn.to/36vXOsr
Have you read the first two books in the series?

You can find Legacy and Peacekeeper here:
LEGACY: https://amzn.to/32BNHkN