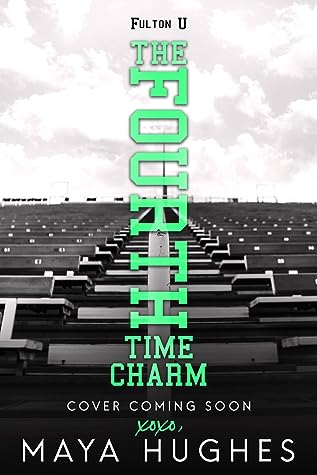 The Fourth Time Charm; Fulton U #4
(An interconnected standalone within a series)

A friends to lovers book with so much emotion it will leak out of your eyes.

The Fourth Time Charm interconnects with the other Fulton U stories and even the Kings of Rittenhouse. I love that so hard!! However, this is also a complete standalone probably more than the other Fulton U books were. LJ and Marisa live in a bubble within their own love story where the secondary characters come and go and if you haven’t read the other books you will not be lost, I promise you.

“I’ve loved her since we were fifteen. It’s never going away.”

Swoon, right!! He keeps those feelings locked up refusing to lose her friendship over telling her how he feels, especially when he’s tried a few times in the past and they’ve all blown up in his face. He’s lost in how to express how he feels, especially since the football coach is her estranged father. The very man who has his future and his balls, if he were to actually date his daughter, in the palm of his hand.

Marisa also feels the same way about LJ, although I’d call what she feels for him, just surface love, as I’m not sure she understands how to deal with more than that. Don’t get me wrong, she is still very much in love with him, she just has layers and layers of issues to work on when it comes to understanding how to show that love, but there are lots of reasons why that is.

Marisa had a crappy childhood, there is no doubt about it. Her father left at an early age, which caused feelings of abandonment, and then her mother basically checked out, furthering those feelings. It’s hard to understand what love is when the most important people in your life basically tossed you aside. It isn’t until her father, who is the head coach at Fulton U, wants to try at a relationship (after a little more than ten years of abandonment) that Marisa even tries for some sort of connection with her father and she takes LJ, her best friend, along to those get togethers, never realizing that it puts his future in threat.

These two have been the rock for each other since elementary school. Furthering their bond when Marisa donated bone marrow to LJ’s dad when he was sick. It’s hard to feel like LJ would really love her for her and not just as a donor in the off chance his dad ever became sick again. There are so many emotional layers to their bond, it’s no wonder they’ve never uncovered it to reach for more, as much as their hearts may want to.

The Fourth Time Charm is probably Maya’s most emotional book in her Fulton U series, while at the same time it contains the sweetest hero and heroine of all of her books. LJ has the to be the most caring man I’ve read in the longest time. Not only does he love his family, but he loves Marisa something fierce. He takes the world upon his shoulders and will do anything for those he cares about. That is abrimonable in anyone, especially someone of his young age.

Marisa is so strong for what she’s been through in her young life. LJ has been her only constant and she doesn’t want to lose him. A romantic entanglement is so risky, no matter what her hormones scream, so it’s completely understandable that she’s scared to risk something further. She doesn’t understand that LJ loves her no matter what. Marisa has never understood what that means.

The Fourth Time Charm made me giddy with happiness, it also made me sad with emotions, it made me fall in love with these two and their long time friendship turned lovers. It was truly everything Maya could have given us.

Choose between my best friend and my football dreams?
Both. I want both – Forever.
Why does my best friend have to be the coach’s daughter?
Coming January 7,… More 2021
Add to your Goodreads TBR: http://bit.ly/TFTC_GR

“I’ve loved her since we were fifteen. It’s never going away.”

2 thoughts on “Review – The Fourth Time Charm by Maya Hughes”