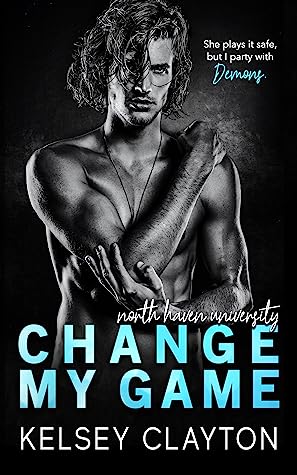 Change My Game; North Haven University #2
(A standalone within a series)

My heart was in my stomach from the very first page. Change My Game is a gut wrenching emotional story about redemption, addiction, loss, second chances, and finding yourself at the end of it all.

Kelsey really dove into the underbelly of Jace and Paige and plucked out all of their emotions, bringing forth their depth and letting it drip off the pages so it would sink into your soul.

Change My Game is a heavy hitter romance with two characters that carry a lot of emotional baggage into their second chance meeting. Jace is set out to self destruct and destroy not only himself mentally, physically, emotionally, but pretty much anyone who gets in his path. The only person who seems to care is his best friend, Carter, and Jace works pretty hard at abusing that friendship at every turn. Carter reaches out to the one person in their past who might help, but it’s a long shot given how she ghosted from their lives. The one person who was a constant friend growing up and eventually became more, Paige.

Paige is back in North Haven, but she is barely able to keep her own emotional baggage in check. Her father is sick and she’s back helping her mother keep him comfortable in his final days. Paige doesn’t have time to take on Jace’s baggage, but at Carter’s insistence she also can’t seem to walk away. At one point in time Jace was important in her life and then suddenly he wasn’t. She may have been the one to cut ties almost two years ago, but would she be okay knowing he was really hurt now when she could be the one help. Stepping in to his world again is one of the easiest and hardest things to do, but who ever said matters of the heart are easy.

The agony of both Jace and Paige and what they are going through bled off the pages and tore through my heart. Kelsey filled the story not only with love and friendship, but twists and turns that had my gripping my kindle and needing moments to pause, stop and mentally scream. To say Kelsey changed the game with this book seems punny, but instead what she really did was upped her game for the entire series.

Change My Game is a non-stop read through once you begin, but prepare for this game changer.

My name is Jace London,
And I may have screwed up.

I’ve always been the guy who had it all.
Privilege, entitlement, and a life of luxury.
But after one college night gone tragically wrong,
Nothing has ever been the same.

Everyone thinks I should be happy.
With a trust fund like mine, who could be sad?
But no one knows what’s going on with me,
Or the nightmares that keep me awake at night.

I finally found salvation in a parent’s worst nightmare.
The only thing to ease the pain just enough to breathe.
My friends are worried I’m going to ruin myself.
What they don’t realize, is I’m already dead inside.

Now they’re ready to pull out all the stops,
Including a therapist that gets paid an ungodly price.
No amount of money can bring back the guy I was,
But the girl that got away might be enough to try.

Gorgeous, strong, and confident to a fault.
If anyone can save me from myself, it’s her.

Change My Game is a standalone and part of the North Haven University series. It deals with sensitive topics that may be triggering for some readers.

He was supposed to be a temporary getaway from my disastrous wedding day. Not the hottest guy I’ve ever laid eyes on…

I’m probably not the first runaway bride to get discovered hiding in the back of a stranger’s pickup truck. And Maverick should probably dump me on the side of the road and be on his way. Instead, he agrees to give me a ride across the country.

I quickly learn that Maverick isn’t just a sexy football star. He’s also bossy as hell with a surprising sweet side.

So when absolutely nothing goes according to plan, I tell myself that whatever happens on this temporary road trip will be just that—temporary.

The last thing I need is to get attached to a bossy baller whose priority will always be football.

But just when I think I’ve got everything under control…

Maverick changes the play at the line.


SEE ALL THE DECEMBER RELEASES HERE:http://www.cockyheroclub.com

USA Today Bestselling author Melissa Belle writes about smart, sassy women and the hot, loyal men who want them. She spent years in the field of psychology before writing her first novel while taking the train across Europe. She often works through her story ideas while hiking with her husband or hanging out with their two kitties. She loves road trips and songwriting. And cupcakes.

Florence Harris thought if she ever fell in love it would be with someone sweet, dependable, boring.
Nope.
Turns out she likes arrogant, annoying, ego so big it wouldn’t fit in the ocean Eli Lennox.
Just because he saved her life he thinks it gives him permission to meddle in it. He’s determined to save her from herself.
Problem is she thinks she’s beyond saving.

She’s beautiful, intelligent, and the sexiest woman Eli had ever laid eyes on, and she turns him down flat when he asks her out.
That doesn’t happen to him often.
Or ever.
And it makes him determined to prove to her she’s worth every ounce of effort he’s going to put into winning her heart.
Eli Lennox always gets what he wants.


SEE ALL THE DECEMBER RELEASES HERE:http://www.cockyheroclub.com

Jane Blythe is a USA Today bestselling author of romantic suspense full of sexy heroes, strong heroines, and serial killers! When she’s not weaving hard to unravel mysteries she loves to read, bake, go to the beach, build snowmen, and watch Disney movies. She has two adorable Dalmatians, is obsessed with Christmas, owns 200+ teddy bears, and loves to travel!

There isn’t much I wouldn’t do.

In fact, my income depends on doing things most women wouldn’t.

But one thing I’ll absolutely, positively never do again is fall for the charms of Mason Lennox.

Mason may be the manliest hunk of manhood I’ve ever salivated over, but he’s the son of my mother’s arch-nemesis. And seeing as he’s already broken my heart once, I’d have to be certifiable to go back for seconds.

Especially as I’m sure he’s hiding something big from me. And not just in his pants.

*No Laughing Matter is a fun romantic comedy with loveable characters, hilarious banter, a little heat, and a swoon-worthy HEA.

The man was huge, with wide shoulders and bulging biceps.
I recognized him instantly, though he had a scar on his neck that wasn’t there last time I’d seen him.
“Mason Lennox?” I was so shocked, I said his name like a question, as though I expected him to answer.
More shocking was the fact he did answer. “Hello, Carlotta. It’s been a long time.”
“Wow. You actually spoke to me.”
As he came closer, he looked even bigger. Could he be Jason Momoa’s sparring partner? A bare-knuckle boxer? Or a stunt double for the Incredible Hulk?
“What are you doing in San Dante?” he asked.
“What are you doing here?” I wasn’t about to explain my career disaster, and how I’d come home to give myself time to get back on track. Not when looking at him made me feel so unbalanced.
Mason was my first. Well, to be clear, though he claimed a lot of firsts from me, the one thing he didn’t take was my virginity.
But at thirteen years old, he was my first crush.
At fifteen, my first kiss.
He was the first boy to touch my boobs.
And most importantly, the first to break my heart.
But there was nothing boyish about Mason now. He was a man mountain, made up of muscle, hard edges, and a dusting of stubble, wrapped in a thick layer of sex appeal that was only enhanced by his scars, and the whole powerful-and-dangerous look that was definitely working for him.
He wore a faded gray T-shirt that had to have steel reinforcing for the seams to still be holding together, and he wasn’t so much wearing his jeans as allowing them to hug him. Tightly.
Unfortunately, in spite of the way he’d treated me, he hadn’t developed any deformities. Instead, just looking at him made my legs weaken.
Don’t be ridiculous, I told them sternly. He’s not that good looking.
My legs didn’t bother to reply. They knew I was lying.
Mason Lennox had grown into the manliest hunk of manhood I’d ever seen. So the universe must have decided my crap sandwich wasn’t already chewy enough.
“I’m here visiting my family.” Mason leaned against the fence that separated the two back yards and I was momentarily afraid he’d take the entire thing down.
“Me too,” I said. “I’m staying with Mom.”
That’s when Mom hollered from the back step.
“Lennox!” she roared. “Stop licking your penis!”
I didn’t get embarrassed. Ever. A childhood with my mother had inoculated me against shame. Constant exposure to it had acted like the world’s strongest vaccine, which meant I could laugh in the face of humiliation. In fact, I’d made a career out of encouraging young women to be happy in their own skin. My humor was shameless, and though it meant exaggerating my own flaws and exposing the most personal parts of my life, my cheeks no longer remembered how to blush.
So when Mason’s brow furrowed, why did they feel warm?

No Ordinary Christmas – a holiday novella

FREE for a limited time!

#2 No Fooling Around – Releasing January 31

Talia Hunter is a bestselling author who likes to pair loveable heroines with the hunks who deserve them. Her motto is, if you aren’t laughing, you aren’t doing it right.

She’s recently moved to Australia, where she’s constantly amazed and not at all freaked out by the weird and wonderful critters. When she’s not writing, you can usually find her with a glass of wine, a good book, and a jumbo-sized can of bug spray.

There is a giveaway for a $30 Amazon gift card