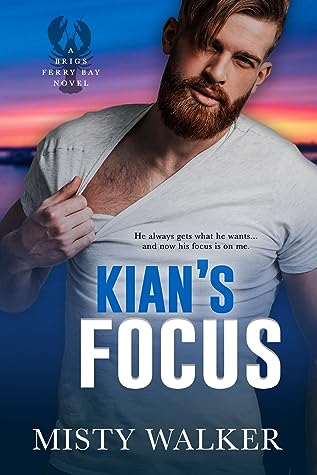 Kian’s Focus; Brigs Ferry Bay #2
(A standalone within a series)

A heartfelt story that not only focuses on how love can heal a lonely broken heart, but how family is more than just blood, but the people by your side in your hour of need.

Archer and Kian would seem like an unlikely couple on paper, but boy do their differences fit together perfectly to solve a complete puzzle.

Kian is happy-go-lucky, a man with a plan, organized, put together, and a friend to everyone. His only regret, the one loss in his life, is Jax, his high school boyfriend. Aside from that one heartbreaking moment of never feeling worthy, Kian is the the man everyone comes to for advice, so when Archer, the new man in town doesn’t instantly fall under Kian’s spell – well – Kian just works harder to get Archer on Team Kian. Unfortunately, it gets Kian friendzoned, but little does Kian know that it has more to do with Archer’s past than Kian himself. It doesn’t help when it digs up those old feelings Kian thought he’d buried, but come rushing forward when Archer picks at old insecurities.

Archer comes to Brigs Ferry Bay with a lot of baggage and I’m not talking about the kind you pack in a suitcase. He initially arrives to help his sister with her children who has recently separated from her husband, but the additional benefit of coming to town is escaping from a painful past of his own. Grieving the loss of his long time partner, Archer isn’t looking for a relationship, but when he meets Kian he’s instantly attracted to the charismatic man, something he hasn’t felt in the year since he’d lost Mason. Once he can no longer deny his growing attraction, they agree on a friends-with-benefits arrangement, but will it be enough for the man who always has a plan and is happiness personified? Can he give Kian what he really needs when push comes to shove or will Kian always be waiting for more?

Kian’s Focus is a heavily emotional book that deals with sensitive subjects. Both Kian and Archer want to fix problems (which men always want to fix things – give them a hammer and they will find a nail to pound or insert any other male analogy here), so in their own way they truly want to help, but ultimately the problem isn’t theirs to fix nor is it a male issue at the end of the day. (Oh, see what I did there…I truly don’t want to give away too much of the story, but this book is still going to touch you deeply).

I lost my boyfriend on the night I had planned to propose.
It was a horrific accident that was all my fault.
I gave up and resigned myself into a life of obscurity.

Until I got a call that my sister, Sara, needed me.
It gave me purpose and I ran to her rescue.
Because that’s what I’ve done our whole lives.

That’s how I ended up in Brigs Ferry Bay.
But when I showed up, things were so much worse than I thought.
She was sullen, fragile, and sinking into a depression I didn’t know how I’d get her out of.
Together, we were drowning.

Until I met Kian.
He’s everything I’m not.
Bouncy, bubbly, full of life, and an innate ability to make everything better.
He makes me believe I can be happy again.

Now the unthinkable has happened and Sara is on the verge of losing her life.
Once again, it’s all my fault.
Kian had clouded my vision with promises of hope and forever.
I was so stupid to believe I could be happy again.

I try push him away.
To shove him out of the darkness that follows me.
I don’t want him to suffer the future fate had secured me to.
But Kian’s focus is on me
And he’s used to getting what he wants.

*Brigs Ferry Bay is a steamy MM romance series. While each book can be read as a standalone, to get the full experience, they’re best read in order.
Enemies to lovers, hurt comfort, age-gap romance, and so much more.
Fall in love with the charming small-town gay romances of Brigs Ferry Bay.