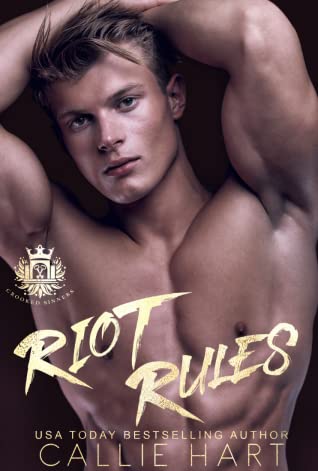 Riot Rules; Crooked Sinners #2
(A standalone within a series)

Winding through two years worth of story at Wolf Hall we get to witness the ups and downs of several characters through this timeline while still keeping the heart of the story between Dash and Carrie. Trust me when I say you are going to fall deeply in love with Lord Dashiell, and weep for everything that is Carina.

With the length of this book it’s hard to summarize everything that is completely and totally amazing about this book, but one of the best parts I love is how it weaves in and out between the timeline of Riot House. Riot Rules begins well before Elodie ever walks the halls of Wolf Hall and yet this book also ends after Wren and Elodie have their love story. Callie was brilliant in her writing to fit Riot Rules uniquely around that timeline and still gave us a fresh new love story that fit Dash and Carrie on both sides of Riot House along the way.

Dash and Carrie both made my heart soar and plummet to the ground multiple times as I was reading. Doomed lovers, they would appear, from the very beginning. Lord Dashiell is a titled Englishman afterall, only attending school in America after embarrassing his father – in other words, he’s been banished. He is still supposed to return to England and assume his rightful place as a Duke, given he meets his father’s expectations, which wouldn’t mean dating a common place girl. He knows better than to get close to Carrie, for more reasons than just his duty, but try telling that to him whenever she comes close. His brain short circuits, along with other body parts. So is there any harm in just taking a small taste, just this once. Get his infatuation out of his system? He will leave America at some point and his time at Wolf Hall will all be a distant memory, he might as well make the most of it.

Carrie is so far beneath common, she is living a lie. A lie she has become so ingrained telling that she has almost forgotten her real name, not that she’d ever want to return to the filth and squalor she came from, but she needs those lies to save herself from something more dangerous and telling the truth isn’t an option for her. No matter what her body may want, a sinful foreign boy whom she can’t seem to stay away from, her mind knows better. He can never know the truth about her and that is the harsh reality she knows she must face, but until then, she’ll listen to her body. Make the most of the time she has left, what’s the harm in enjoying life?

Trying to contain a lie, a secret, something that should flourish, is never a good idea, especially at Wolf Hall. It always gets out and when it does, it explodes. Dash and Carrie’s romance is a fever that will ignite in your heart and explode through your system. These two will have your heart beating faster and your mind screaming over how to make their love work. Afterall, we know of another titled Englishman and commoner who wed not so long ago.

While there are timelines that coincide and made me giddy, this book also reads as a complete standalone. Although if you haven’t read Riot House yet, I would recommend reading it first just because Riot Rules will give away some of the Ah Ha moments and might spoil those for you, other than that, get ready for an amazing read in Riot Rules. You will not be able to put this book down. 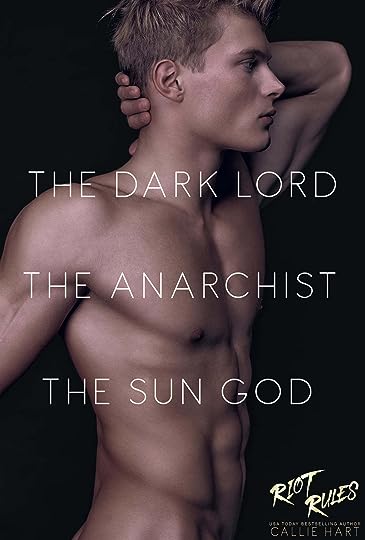 You think you know me, but you’re wrong.

You look at me and see Carrie, the girl with the wild hair and the wild clothes.
Reliable Carrie. Friendly. Quirky. Perhaps a little strange.
What do you really know about me, though?
The details of my past are up for debate.
I’ve been careful to hide my sins, and even more careful to follow the rules.
I do as I’m told. I keep to myself. I don’t mess around with boys, and I’m always ready to run.
At least that’s what I tell myself, anyway.
Since I met him, I’ve broken every single rule in the book.
He’s impossible. Arrogant. Terrifying.
If I’m not careful, Wolf Hall’s golden boy will do more than make me break the rules. He’ll wind up breaking me.

First, they hate me, then they hate themselves for wanting me. That’s how it always goes.

I’m the smart one. The charming one. The guy with the accent that makes girls go weak at the knees. As a resident of Riot House, I’m destined to rule Wolf Hall. Doesn’t matter where you come from. How much money you have. What your future holds. Cross the path of a Riot House Boy and you’re guaranteed to pay the price.
The girl isn’t special. She’s just another cog, turning in the wheel. So why, then, am I protecting her? And why am I keeping her a secret?

Call me a monster.
Call me a fiend.
Call me reprehensible.

*Riot Rules is book two in the Crooked Sinners Series. It is a complete 135,000 word story that can be read as a standalone, or in conjunction with the other books in the series.