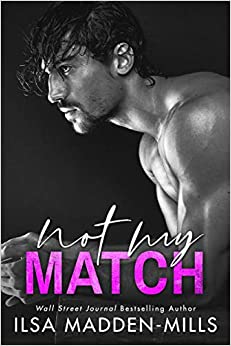 Not My Match; The Game Changers #2
(A standalone within a series)

This right here demonstrates the best formula Ilsa Madden-Mills writes – broken, hot jock falls for quirky, smart girl. It’s one of the reasons why I never hesitate to read Ilsa’s books and she has become a one-click author for me.

Ilsa is a master at bringing the vulnerability out in every character she writes and in Devon and Giselle it is no different. At first we meet a confident pro-football star and shy science girl, but soon we discover their inner workings. Devon has more to him than just the confident womanizer he appears to be and Giselle may be inexperienced, but her inner vixen is dying to break free.

Giselle has the worst luck in the dating department. From a very early age, not only has her choices in the wrong men led to disastrous dates, but some of those dates have lead to the men going to the hospital. She refers to it as being cursed, but maybe she just hasn’t met the right man to break the curse. She hasn’t proven that theory because well…no man has ever felt right or really stuck around. Poor Giselle. However, Devon can’t seem to stay away, but he’s not dating her. He’s the best friend of her sister’s husband and when Giselle needs a place to stay he offers up a room at his place. That’s what acquaintance/friends do after all.

Devon has no idea what he’s doing. Offering up his pent house to Giselle is a horrible and wonderful idea all wrapped up in one package. She temps him like no other woman ever has, but he also knows it’s the best option when she has no where else to go after her apartment building caught on fire. It’s just for a few days until she can find something else, but those few days may just drive him out of his mind, while she drives herself into his heart.

While Giselle has never really had a real relationship with anyone, she is so sweetly quirky and adorable in her innocence. Her brilliant mind is really what attracts Devon to her more than anything as they build a friendship between them. Where as Devon hasn’t had a real relationship with a woman since college, so letting Giselle get close is dangerous territory, but the longer he tells himself it is just a friend helping out a friend he’s fine, but the longer he fools himself it’s just a timebomb waiting to explode. The chemistry between them is truly explosive, but they both keep a lid on it, neither one of them willing to jeopardize what they have, but can it last the longer they are in each other’s close proximity?

This is a slow burn, friends/roommates to lovers romance with a lot of witty banter, quirky characters from Daisy and hot men from the football team. Overall, it’s a wonderful, fun read.

Homeless and heartbreakingly innocent, Giselle Riley walks into my penthouse and chaos follows.

I shouldn’t have invited the girl genius to live with me, but it’s clear she needs my help—not only for a place to lay her pretty blonde head but in finding real love, which she’s not going to get with the crazy men she picks up online.

Too bad she’s a twenty-four-year-old virgin and I’m a bad boy wide receiver. She’s off limits for a hardcore player like me—and we’re just friends.

Instead, I’m her matchmaking service, no matter how jealous it makes me when I tag along on her dates.

I can keep my self-control. Right? No way will I give in to everything inside me that dreams of a girl like her in my world.

I may be the best wide receiver in the country, but how could I hold on to a girl like her?

1 thought on “Review – Not My Match by Ilsa Madden-Mills”