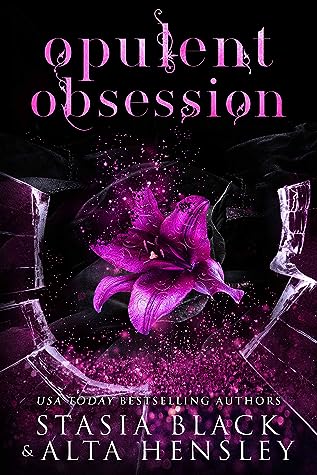 Opulent Obsession; Breaking Belles #3
(A standalone within a series)

I have to start with, this series just gets better and better!! The emotional aspect of the characters have grown in depth, while the sinful nature still oozes off the pages. Opulent Obsession is my favorite book by Alta and Stasia so far!

Rafe and Fallon have a past. Growing up as best friends, while from opposite demographics an unlikely coupling, they found a deep connection as lost souls. Rafe is the second born, the disposable son and only needed within his family when his older passed away. Rafe made me want to cry right from the very beginning. His family never really saw him, except as his brothers ghost. Rafe carries the world upon his shoulders every single day and he’s very easy to like. He’s sad in the way he feels unloved and he wants to please everyone around him, he just wants to be loved.

Fallon on the other hand attended the same school as Rafe and his friends, but as a charity case (at least in her eyes) since her mother was the maid who cleaned Rafe’s home. It’s now years laters and circumstances have brought them back together (it’s time once again for an initiate of The Order of the Silver Ghost to pick a new belle) which means if Rafe picks her out of all the others she could get whatever her heart desires. She desires an easier living than what she grew up in, which means providing for her mother, but they have to make it to the end and past hurts may stand in the way of her ever moving past forgiving the boy who broke her heart. Fallon is strong and I admired her strength from the very beginning, but I also admired the way she held herself together to endure everything that life threw her way.

Both Rafe and Fallon seek to let their past ghosts go as they accomplish each trial, but neither make it easy on the other as their pasts may be too thick to wade through.  It’s possible that unlike their previous friends they may not find a happily ever after together.

I’m an imposter, a fraud, unwanted… but that won’t stop me from claiming her.
She is part of a tortured past I’d rather forget.
A flesh and blood ghost here to haunt me for my sins.

I will never forgive myself for living when my brother died.
As a penance, I’m forced to live his life.
To claim what should have been his birthright.

Soon, I will join the most powerful men in the world as a member of The Order of the Silver Ghost.
A secret society which feeds on the weaknesses of others, glorifying in their own dominance and wealth.

Into this opulent nightmare of my own making, she reappears.
I am consumed by her, just as I had once been in our past.
And no matter how hard I fight against the passion that is trapped inside, she manages to haunt me more than my dead brother ever did.
She will be both my salvation… and my damnation.