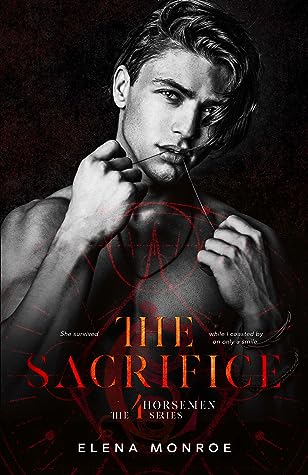 The Sacrifice; The 4 Horsemen #3
(A standalone within a series)

YESSSSSSSSS!! Let me count the reasons why this book is AMAZING!!

It is dark…so if you are expecting sunshine and gummy bears, as Khaos does seem to project that, beware it’s all a cover (this time I’m not talking about #1). Khaos does live up to his name in bringing chaos everywhere he goes and it’s not in the healthiest of ways. He destroys and wreaks havoc and drips poison wherever he can. Yes, I made fun of the trigger warning, but seriously, if you have problems with dark themes, drug use, polygamous relations, orgys, fluid sexuality, etc… then this story isn’t for you, but if you enjoy treading in these waters, jump in and enjoy the fun that is Khaos.

Khaos has been my favorite since the beginning of this series and this book solidified his standing among the 4 Horsemen. He is certainly misunderstood, among his friends, among his coworkers, to his alphabetical girlfriends, to basically everyone in the world except Birdy. She sees behind the mask he wears and this excites Khaos more than anything or anyone ever has before. Unfortunately, for a man like him, a man who embodies his own name, he has rules and those rules don’t allow him to touch, taste, or have Birdy. Pity, that’s a lot of “no” for a man who never really denies himself. Khaos is so full of love, he just misdirects what that means in very unhealthy ways. He’s glutinous, impetuous, impulsive, a true lover and not a fighter which makes him mouthy and cocky and frankly everything adorable, but also very misunderstood. I love everything about Khaos and he just needed to find the right woman to help direct his Mayhem and Anarchy!

Grace – or Birdy – has come from a life of nothing. Thrown into a dumpster at birth, then thrown into the foster system, only next to be thrown into juvie, when Grace was plucked out of a nothing life to enter a gang she really knew no difference. Her life has never been her own, living for the people who only seem to throw her away at the first opportunity they have. Meeting Khaos is an experience she’s never encountered before, a man with everything at his fingertips, but beneath his happy mask she can see how lonely he is. She shouldn’t be intrigued by the man that lives for the spotlight when she prefers to live as a ghost, but she has a hard time saying no.  He could be the man to set her free an help her fly or he could be the man who ends up getting them both killed. Pick a hand.

They come across as opposites, for example-Grace is a ghost and Khaos is an attention whore, no matter what their weakness is the other makes up for in their strength. Birdy is strong where Khaos is not, he is loving where she struggles to understand what that attachment means. They are truly the perfect yin and yang to balance each other out. They also have an underlying connection in their loneliness. Where Grace has lead a life of truly being alone, Khaos has masked it by surrounding himself in a group of people that he really didn’t connect with so he wouldn’t have to face the pit of loneliness inside of himself. Their souls feel that connection and breaking that bond once it’s linked is almost impossible.

These two by far are my favorite couple in this series, but I also loved how Elena entwined the entire family that continues to grow within the Clave; Grimm, Vic, along with Abigail and Justice. They all made me giddy with each moment they popped up in the book and how they too continued to grow as characters. Bowen is still a bit of a mystery, but the small bit Elena did give only made me salvate for more.

The Sacrifice is a truly amazing read and Khaos is the absolute best!!

KHAOS
I’m not living under any kind of false pretenses here. I know I’m basically a rapper’s attitude with R&B feelings and a pop star’s bank account.
There were a lot of ways to describe my unconventional lifestyle of part time cult member and full time showman.
Risk taker.
Exuberant.
And my personal favorite adjective: undomesticated.
I surrounded myself with people who liked a good time but left after they served their purpose of making sure I felt nothing but top shelf feelings.
I wasn’t about to be like my brothers who let the darkness eat away at their vindication. The only crime I had ever committed was waving the glory of being invited, of saying I came and conquered around like a badge of honor.
Spoiler alert: None of that earned me respect.
There’s only one girl who managed to rob me of my fake smile… and my watch.

GRACE
I was a throw away, street trash, a child abandoned and scooped up by the bad people you only hear about after they get caught.
I was hard in a way people found uncomfortable and determined too much work to rehabilitate into society again. I was found guilty over and over enough to let the bad things become who I am, blurring the lines between freedom and a jail sentence.
Fraud.
Thief.
And my least favorite: fake girlfriend to a scary ass kingpin.
Forced out of a childhood I was surrounded by darkness, evil, and the kind of cutthroat loyalty that landed your body so mutilated they wouldn’t be able to tell who you were if you fell out of obedience.
They accepted me like family and there’s no quitting your family.
I had the respect to match my rap sheet.
There’s only one guy who managed to exonerate me… and my invisible wings.

2 thoughts on “Review – The Sacrifice by Elena Monroe”