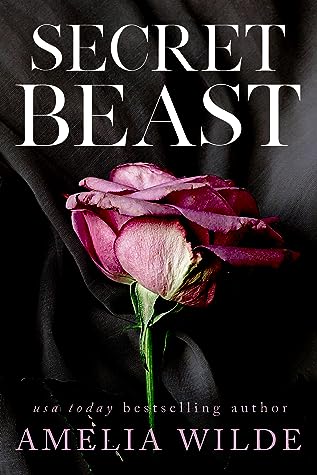 This dirty, twisted version of Beauty and the Beast was absolute perfection! Every step was masterfully crafted to a dark version of the beloved classic, while also highlighting the Morelli/Constantine dueling dynamic beautifully.

“Villains aren’t supposed to kiss the virtue out of you.”

Amelia Wilde brings another story to the Midnight Dynasty World with Leo Morelli and Haley Constantine front and center. Leo Morelli has been targeting the Constantine’s for years, but aside from that these are two powerful families usually going after the same things, what was Leo’s underlying reason for his cruel methods of achieving his goals? He is known as the Beast of Bishop’s Landing not because he’s cuddly and warm, but for his cruelty and dark demeanor. Secret Beast gives us an inside look into why he ruthlessly goes after what he wants and how he became the Beast.

Haley Constantine may be a Constantine, but her family is not one of the well off Constantine’s. Her father was known more as an embarrassment within the Constantine family tree and as such Haley spent her life sandwiched between avoiding the wrath of not being good enough and living up to the Constantine name she also spent her time avoiding outside forces like the Morelli family who could also hurt their family because her last name was Constantine. Haley never felt safe with anyone and even if she was tired of always protecting her family, at the end of the day she loved them fiercely.

When Haley’s father makes a deal with the Beast of Bishop’s Landing, the only thing she can do to save him is trade herself to save her father. During her captivity where she thought she was walking into the devil’s den it was actually the first time she actually felt safe in her entire life, but could it be at the risk of losing her family and the man she’s come to care for?

Secret Beast ends on a cliffy and I know I’m waiting on bated breath for the next installment. This entire world has pulled me in and I love the back and forth between the Constantine’s and Morelli’s, each family pulling on my emotions as I go back and forth depending on which collection I’m reading.

I couldn’t have imagined a better retelling for a dark Beauty and the Beast within this Midnight Dynasty Collection.

The beast hides a dark secret in his past…

Leo Morelli is known as the Beast of Bishop’s Landing for his cruelty. He’ll get revenge on the Constantine family and make millions of dollars in the process. Even it means using an old man who dreams up wild inventions.

The beauty will sacrifice everything for her family…

Haley Constantine will do anything to protect her father. Even trade her body for his life. The college student must spend thirty days with the ruthless billionaire. He’ll make her earn her freedom in degrading ways, but in the end he needs her to set him free.