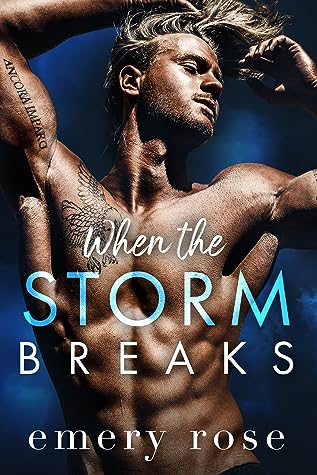 When the Storm Breaks; Lost Stars #2
(An interconnected standalone within a series)

Layers and layers that create tears and emotions and feelings…it’s what Emery Rose is the best at and as much as you want to despise her for it, I keep coming back for more. I totally love the angst and heartache and just overall happiness that I end up with by the end.

Brody is a character that has always felt broken. Never measuring up, never feeling wanted, and certainly never coming first in anyone’s life. He connects better with his horses than he does with people so it’s no wonder when Shiloh comes to stay on his farm he doesn’t see much beyond her initial stay. Brody is far from an optimist, especially when it comes to relationships, but something about Shiloh and the brokenness he sees inside her calls to him like no one has before.

Shiloh may be a rockstar, but living in the spotlight isn’t exactly conducive to making genuine friends. It doesn’t help that the few people who actually know the real her have actually taken advantage of her, breaking down her spirit over and over again. She needs to get away before she starts her long tour and Brody’s ranch is just the place to do it. She never expected to fall for the grumpy cowboy, but when it comes time to leave her rockstar life is even harder to return to than she expected.

These two people live on opposite sides of the same coin. Both have been broken down by people they loved, but they are now two people who live very different lives, one in the spotlight and another who lives in the wide open country. While they have been brought together by chance could they find a middle ground and make it work?

“Her voice was my favorite sound, and I didn’t think I’d ever tire of listening to it. It still reached deep inside and rattled my bones. Made my heart ache in a way I couldn’t explain. Nobody had ever touched me the way she had.” – Brody

Over and over my heart broke for Brody. While I read the first book and know Jude and Lila’s story and where Brody’s friendship came out with them, my heart aches even more knowing where his feelings were during that whole timeline. Brody constantly feels he’s never good enough, no matter what he’s doing, or where he is, or who he’s with. The rare exception is being with his son or with Shiloh, which is a first considering who she is to the world, but with him she’s just her.  So jumping into something more with a woman who could hurt him is risky and Brody is …ugh…gonna break you.

While Shiloh has her ups and downs in life as well, it’s Brody who truly captured my heart and broke it with Emery’s depthful writing. She has this way of bringing out feelings of being totally drained and filled up all at once. When the Storm Breaks feels representative of those emotions inside me, along with everything representative in the book, so have a few tissues handy.

Our worlds never should have collided, but it seemed our paths were always destined to cross.

Brody McCallister was only supposed to be a means to an end. My golden ticket to get me closer to what I really needed—a way to make peace with what I’d done when I was eighteen, dirt poor, and left to fend for myself.

I only had six weeks in the middle of a hectic world tour to do it.
So the last thing I needed was to fall for a cocky cowboy. A walking contradiction with a charming grin, a dirty mouth, and a gift for healing wild and broken things.

His life was in Texas.
Mine was on the road.
He guarded his privacy fiercely.
I was constantly hounded by paparazzi.

Everyone warned me it could never work, that ultimately I’d be forced to choose—my music career or him.
I didn’t listen. I fell for him anyway.
Hook, line, and proverbial sinker.

But Brody was hiding secrets.
And when the storm finally broke, it destroyed everything in its wake … including us.

2 thoughts on “Review – When the Storm Breaks by Emery Rose”