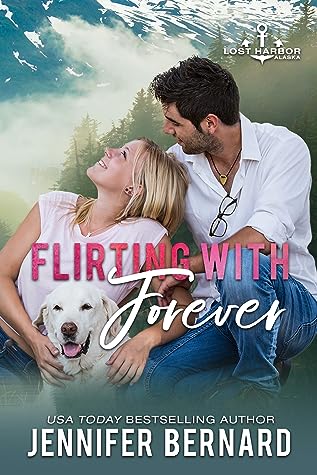 Flirting with Forever; Lost Harbor, Alaska #8
(A standalone within a series)

Review:
A fun, flirty return to Lost Harbor and the people I love in that small Alaskan town.

No matter how often I return, the people Lost Harbor always bring a smile to my face. This book in particular was extra light and Chrissie and Ian had great chemistry right from the get go making their interactions fun and always flirty.

While Ian always felt awkward around people, he found a great ease every time in the presence with Chrissie. Something about her easy going personality makes him light up and open up, something that he often struggled with on a personal level. Hence, his hiring a matchmaker to find the perfect woman for him and then going a step further, once he finds such an easy rapport with Chrissie, asking her to teach him how to flirt.

Upon returning to Lost Harbor, Chrissie finds a hero, well – thanks to Ian’s adorably charming and spirited nephew, Bo – Ian rescues Chrissie from the side of the road when her car breaks down. Their chemistry is instant, but Chrissie has no plans to settle back down in Lost Harbor, so no matter how much Ian and Chrissie are attracted to one another neither make a move to act on it, but Chrissie agrees to help him and their friendship grows.

I absolutely adored their relationship and didn’t mind that it was a slow burn. Ian’s awkwardness was so adorable compared to Chrissie’s cute chaos that their chemistry just flowed off the page. I really enjoyed his open and honest personality which made her relaxed and open up even more because of it. Between them there were no games which made their relationship blossom and grow and in turn also made both of them so likeable and their story was really refreshing to read.

Lastly, I loved how supportive Ian was of his nephew, Bo. Their relationship is one I wish more people had not only with their own relatives, but with the world in general. Bo is so magnetic and I loved him every time he popped up on the page. You’ll also get visits from lots of old characters and some new ones as well. Lost Harbor is always a joy to return to.

A standalone romance in the Lost Harbor, Alaska series

Dr. Ian Finnegan knows all about brains; hearts, not so much. He’s ready to find the perfect match, someone as logical and sensible as he is. When the matchmaker he’s hired suggests he improve his seduction skills, he’s not sure where to turn—until he plucks a damsel in distress from the side of a snowy Alaska highway. She might be a “hot mess,” but Chrissie Yates could be just the fun and flirty tutor he needs.

Chrissie hasn’t been back to Lost Harbor since her eccentric recluse of a grandfather sent her away at the age of seventeen. Her family now consists of her beloved yellow lab and her broken-down car. Why Gramps has left her his property, she has no idea. She hopes to get in and out as quick as she can, but reconnecting with old friends and her quirky hometown makes her yearn for something she didn’t know she needed. Then there’s the sexy newcomer…

Flirting lessons turn to something more passionate, as Chrissie makes Ian feel things he never dreamed. Is it possible he had the wrong idea about who’s right for him? Can he put his new skills to good use … before a deadly storm threatens all he holds dear? 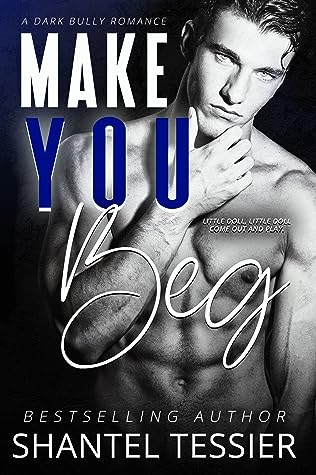 Make You Beg
(A standalone)

Mind Blown!! What twisted darkness Shantel has written! I devoured it in one sitting and she has me begging to crawl back for more! Make You Beg is such a demented read and I loved every minute of it!

Law, Dax, Scout, and Rellik (also known as The Reapers) will keep you guessing and certainly keep you twisted in knots until the bitter end. I was pulled every which way and never knew which way to lean as they played with their little doll, Henley. She stuck to her guns and is a very strong heroine, especially when dealing with her ex-best friends.

Trying to get her life back on track after accusing Dax of rape and murder, which he was acquitted of, is hard to do when The Reapers won’t ever let her forget. They pushed, they humiliated, and they certainly brought her to the point where they made her beg. They played with their doll until they all reached their breaking point, but in the end only death will release them from this game. Who will reach it first?

Shantel wove a masterful story and crafted her wicked tale to perfection. I couldn’t put this book down and read it from cover to cover in one sitting. Make You Beg blew me away!

To the world, she’s known as Henley Greene.

To me, she’s a little doll— a toy to be played with and tossed to the side once no longer wanted.

She will pay for her betrayal however I deem necessary.

Imagine living in a constant nightmare where you have no control. Running from
someone or something, you can hear him getting closer and feel his breath on your
neck. You know that no matter what you do, he’s going to get you.

But I don’t have just one. I have four.

Ryan Scout, Van Rellik, Dax Monroe, and Grayson Law are the Reapers of Westbrook
High, my ex-best friends, and now my biggest enemies. They run the school and own
this town. They want nothing more than to make me pay for what I saw that night at
Death Valley. A sick and twisted game that leaves me dirty and bruised with torn clothing.

So how did I fall in love with one?

I was raised to fear the dark side, but he showed me it was in the dark where the truth
came to light. He played with me until my body craved his touch. I was going to prove I
could be his most trusted servant in every form of the word. Whether kneeling before him or lying on my back, my sole purpose in life was to be his.
But when you’re a toy everyone likes to play with, you’re bound to end up broken.

Make You Beg: A Dark Bully Romance was previously published in the Bully Me: Class of 2020 Anthology but has now been reworked and expanded into a new full-length standalone.

Things to know about Make You Beg
It is not RH
It is MF & MFM
It is told in multiple POVs
This is a 140K word dark bully romance and may contain triggers for some due to sexual situations, language, and violence.