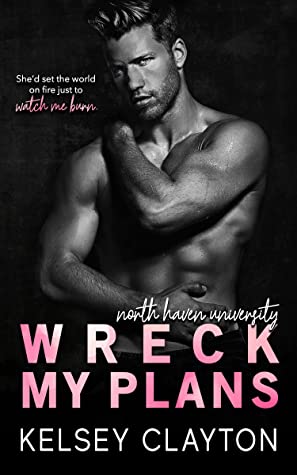 Wrecked My Plans; Haven Grace University #3
(A standalone within a series)

Review:
I totally LOVED this book!! Can I actually admit to having a new favorite power couple?! Yes, yes I can.

North Haven University holds its fair share of preppy, entitled, wealthy young adults and Carter Trayland is no exception to the wealthy population. Although having this status doesn’t make him a jerk, he’s actually somewhat uniquely different. He’s a bit more humble when it comes to his friends and those close to him. And while he’s had his fair share of heartbreak and loss for someone so young, he’s been able to keep his happy-go-lucky attitude about him, and that makes it hard not to like him, especially when you’re the girl out to make his life a living nightmare.

Tye Morgan begins the school year with a vengeance for her BFF, Dami who lost her life while Carter was dating her, but it was more Jace (Carter’s BFF) who had a whole love triangle thing going on…well, you’ll just need to read his story to figure that mess out, but now Tye has a bone to pick with Carter and she’s not leaving until he’s picked clean.

Carter and Tyesen have a tied up, messed up past and even though Tye has transferred to NHU to make Carter’s life miserable, her destructive tendencies sometimes blow back on her and yet everytime Carter is there to ease her mistakes or help lick her wounds (sometimes literally, yum) because that’s just the kind of guy he is, which only frustrates Tye more. Carter is soooooo likeable he makes up for anything that happened in his past. This is one power couple that competes for Clayton’s top spot.

Their dancing around each other, devious pranks, and high octane chemistry certainly makes for excellent reading!!

What I enjoyed most, this book is lighter, definitely not as dark as the previous books in the NHU series. Tye’s pranks are quite funny and Carter takes everything in stride. His easy going attitude and hero like personality, I feel, is what lifts this entire book out of the dark mood that the previous books lived in. Not that Tye and Carter don’t circle their own angst and dark pasts, but I feel like there was more of a shiny sparkle to this story overall. Maybe it was my projections, but I really enjoyed that extra sparkle, especially on the previous characters. They deserved their hard won happy endings with lots of sprinkles and rainbows.

My name is Carter Trayland,
And I really screwed up.

I should’ve ended things before they began.
Instead, I wound up in a twisted love triangle,
One that I never wanted to be a part of.

The wrong choice sent my life on a whirlwind.
A woman I forced myself to love is dead.
My best friend was nearly blamed for her murder.
And the one I’ve always wanted, now wants revenge.

Her favorite person is gone, and she thinks it’s my fault.
I’m not about to correct her either.
Not when the reality is so much worse.

She can’t find out the truth of what happened.
Knowing would ruin her in ways I can’t fathom.
If blaming me is her way of coping, I’ll gladly carry that burden.

Because Tyeler Morgan is the one girl I’d protect at all costs.

2 thoughts on “Review – Wrecked My Plans by Kelsey Clayton”