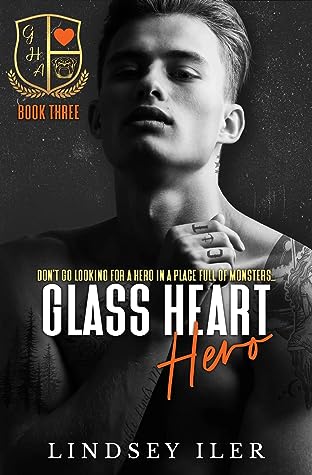 A suspenseful, dark read with twisty turns and a delicious bad boy hero!

Breaker is a dark hero who doesn’t see himself in that light whatsoever. He’s a tattooed bad boy who lives in a glass house with the devil and his demons. While Breaker may be the nicest demon that lives at Glass House, it still doesn’t make him less of a monster, at least in his eyes. However, if you ask his buddies, his buddies girls, and even Delaney, the title of hero comes in many forms, and just because you may be a monster, doesn’t lesson you from being a hero when the situation calls for it.

Breaker will do anything to save those he cares about and he doesn’t care what those consequences are. Sounds pretty heroic if you ask me? However, according to Breaker, because those morals of his would make him do anything from giving the shirt off his back up to digging the grave to bury the body he help decimate, well he has no compass when it comes to what his limit is, hence he doesn’t see himself as a hero. Still…the fact that he cares and will be there no matter what, yeah Breaker is completely sigh worthy.

Now, don’t discredit in thinking Breaker is a complete monster, Breaker is definitely the one guy among his friends who probably has more of a conscience and a soft spot than any of the others. He’s the one who lead both Marek and Byron to see semblance of reason, he keeps Dixon out major trouble, and he now looks after the girls who have become special to each of them as well. But who keeps Breaker safe and keeps the demons from riding too hard on his back?

What drives this dark hero and what haunts him? It is both the same girl that brings him sanity and drives him crazy. Delaney has been with him through a lot already, but last semester broke her. She ran after her friend, Palmer, went through a harrowing ordeal and Delaney was dragged into it and barely escaped. Instead of staying and finding comfort with her friends and more importantly Breaker, she went home and ended up finding solace in a straight laced, khaki/polo wearing boy named Tripp.

Tripp and Breaker go head to head over winning Delaney’s affections, while the boys at Glass Heart also continue working on uncovering the conspiracy that almost lead to the girls demise last semester. A conspiracy that runs decades deep and is more twisted into their backgrounds than they all realize.

Glass Heart Hero is full of suspense, action, and steamy heat. Delaney and Breaker work on a relationship that is broken by a past full of demons and a future that has a potential for more. Can they push past them and really make a relationship work based on a foundation full of darkness?

Welcome back to Glass Heart Academy where lies, deceit and corruption are just part of the education.

Loyalty. Corruption. Family.
A gauntlet rooted in love and jealousy may be the destruction of the students at Glass Heart Academy.

Delaney
Parts of me were stolen in the confines of a dark room. No matter how hard I fought, I got nowhere. The damage has already been done.
Now I find myself in the arms of an unexpected boy. He catches me in the darkness, where I’m too afraid to face the cruel world I now know exists.
He wants every piece of my heart. But how far is he willing to go when it already belongs to another?
After everything, Breaker Davenport haunts my dreams and loving me quickly becomes his own worst nightmare.

Breaker
I have always been certain of a few things in life. Birth doesn’t make a family and when you find someone worth dying for, you fight until you bleed.
Delaney Chambers is worthy of painting the world red.
Fighting for her hadn’t been something I expected to do. Little did I know, he wasn’t the only one trying to take her away from me.
They won’t whisper her name, but I’ll make sure they curse mine.
The monster inside of me won’t stop until they’re buried amongst all their skeletons. 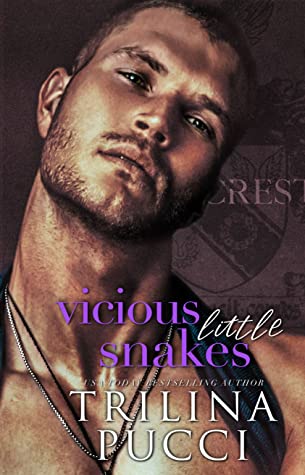 The viciousness totally sucked me in, but the angst kept me up turning pages and on the emotional edge until late into the night!

I have to begin and say I don’t know if I’ve ever read a mother who is more of a cu** than Caroline’s mother. I’ve read a ton of books and come across a lot of moms who are horrible, bad, mean, conditional, abusive, etc…, but Caroline’s really stands out among the cream of the crop. With an interaction between Caroline and Donovan, as children, this leads to a catalyst in not only their relationship but also to everyone within their circle, and it all stems from Caroline’s mother. There is so much to unpack from this childhood moment, but it’s also not the only one. We get more from the mother of the year both in Caroline’s past leading up to her present…Caroline, the viper, that everyone sees is truly a strong woman who’s learned to protect herself and my heart was broken for the girl who never had anyone by her side. She’s just surviving the only way she knows how, unfortunately it is through attacking those around her, a trait that became an art form and Caroline is extremely good at using her fangs and striking those who get too close.

Liam grew up with a loving family, friends, and a  ton of stability. Where he’s a bit of a follower, never speaking his own mind, he has one exception, when he’s with Caroline. She doesn’t hold back when she’s in his presence and in turn he doesn’t hold back when he’s with her. However, he also realizes that their time together can’t last and can’t be public, so anytime they share is secret, which is both wonderful, it also cuts them both in pieces. Both of them know each other better than anyone, but whatever they could have is toxic, for their public personas are filled with jabs, lies, and so much bitterness how could they ever make it work?

Switching back and forth between present and the past, I couldn’t flip the pages fast enough to find out what happens. My heart was constantly pounding up in my throat no matter whose perspective I was reading. Caroline who comes across as a heartless snake to the outside world, is so much more and I was always wanting to give her a hug, even though she’s not a huggy type. And Liam does some very heartless things which knocks him down from that golden pedestal the rest of the world puts him on, but he’s also really great when he’s alone with Caroline so I also wanted to hug him too.

These two are the ultimate angsty couple and I loved reading this whole book when I didn’t want to smack both of them for being so ridiculous for hurting one another. So, so, so amazingly good!!

Caroline Whitmore is cunning, inconsiderate, and ruthless.
Despite that, I can’t recall a day when I haven’t thought about her at least once. On paper, we’re a perfect match—Only on paper.

In real life, we’re a disaster.
She hates me. Hates the way I dress—everything I say.
My basic existence.

But what I hate is more complicated.
Because I’m a moth to a gorgeous, petite, brunette flame.

I hate that I still remember what she wore the day we sat together in sixth grade.
And that I would move mountains for her smile.

I hate every guy that gets too close.
And that one of them gets to stay.

I hate that I want her so bad that I used my best friend to make her jealous.
But most of all, I hate that Caroline Whitmore is the one that got away.

𝐀𝐫𝐫𝐨𝐠𝐚𝐧𝐭 𝐎𝐟𝐟𝐢𝐜𝐞𝐫 is LIVE! Bold, ambitious, exciting. Get ready for the ride of your life as you fall for an ARIES. It all starts when I get an email.

Let me rephrase. It’s a sextortion email from someone claiming they tapped into my computer and recorded me while I was watching a graphic adult video. If I don’t send them money, they’ll forward it to everyone in my Contacts list.

As a chemistry teacher at a private school, I panic. Not only do I love my job, but I also need it.

Desperate and afraid, I run to the police station and ask an officer for help.

Dax is a mixture of a fearless warrior and an undisciplined child. After he proves to me that it’s a spam email and they didn’t actually hack into my computer, he uses the incident to tease me. I leave the police station in a huff, hoping to never see him again.

Fate has other ideas.

Everywhere I go, I run into Officer Harder. Our tension turns heated, and soon, we’re embarking on a fiery and bold romance. The more time I spend with him, the more I learn about the dark past that lingers behind the eyes of the closely guarded cop.

And whatever it is, it’s enough for him to push me away.