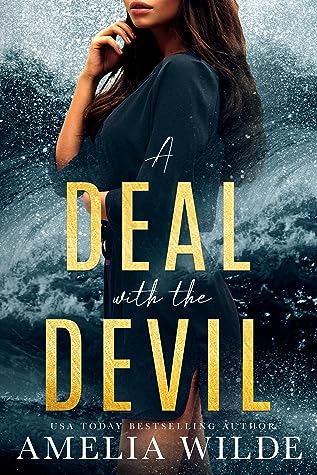 A Deal With the Devil; The Devil Trilogy #2
(#2 within a series)

The imagery is out of this world in this second installment of Wilde’s dark pirate romance!

Delving into the deep end of the ocean with Poseidon and Ashley while they escape treacherous situations I found myself once again enthralled with all of the ocean descriptions in the second book of this trilogy.

While Poseidon, for the first time ever, struggles with the thought of keeping the treasure, Ashley, for himself, he also has to look after his crew, which is his first priority. He struggles with these thoughts quite a bit throughout the story, but while doing so we learn more about the man who seems so unfathomable in the first book as we get glimpses into his past and what makes up the pirate who is more than what he seems. While his call to the ocean is strong, his pull to Ashley is just as deep.

Ashley should be heading home, back to her rich Insta-life, but leaving the man – her captor – and his crew behind becomes harder every day she’s aboard his ship. She struggles with her mixed feelings in her attraction to Poseidon and her disgust over his treatment of her. She knows her life was never perfect, but why does her torment at the hands of a pirate seem better than what she was used to?  Struggling with her feelings on returning or staying, she may not have a choice in the end.

Amelia has written a fascinating twist on these tales and I love the dark setting she’s set the classic folklores in. And yes, A Deal With The Devil is a dark tale, but also written with beautiful imagery. The sea, the ocean, the colors that surround them are just gorgeous and make me want to travel desperately, minus the real pirates of course.

A man can only have one great love, and mine was the sea.

Until I pulled a half-drowned heiress out of the water. Until I kept her as mine. Until I hurt her to prove I didn’t love her.

Now we’re surrounded. Dangerous pirates want to use her for their own purposes. I won’t give her up that easy. I have a lifetime of treasure to protect. But with the ship going down, there’s only thing I want to save. Her.