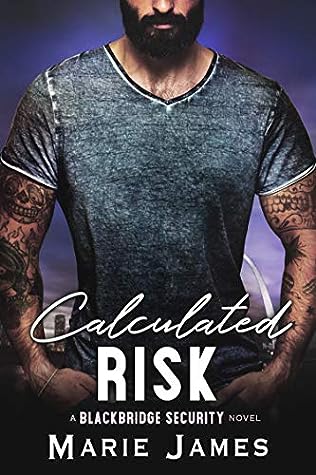 Calculated Risk; Blackbridge Security #5
(A standalone within a series)

We return to the security world of Blackbridge and all those hot men who make the world a better place.

Calculated Risk is a slow burning romance between Quinten Lake and Hayden Prescott, two very different people when you look at them from the outside. Quinten is a gentle giant of a man who is a problem solver covered in tattoos and a beard. He works with a lot of high profile cases, your hollywood starlets, government screwups, basically he has the patience of a saint when he’s able to come in and clean up all of their mistakes. Where as Hayden is a petite woman with a fiery attitude, but works as an accountant in her nine to five job and normally dates boring intellectuals.

These two most likely would never have met under normal circumstances, if it wasn’t for the home invasion that Hayden was a victim of which in turn caused her best friend to sign her up for a gun safety class at Blackbridge Security.

Taking back control of her life isn’t easy and honestly, being the victim of anything traumatizing isn’t easy to come back from, however, a large portion of this story revolves around gun safety and taking back part of yourself. As much as I’d like to focus on the part of the story that was lacking around the suspense of why the home invasion happened (this was my tiny ding in my 5 star rating) and then later revolving around more of what was going on in Hayden’s life, I really, really respected everything else. With the way the world is going and everything in the news I truly enjoyed reading this.

I felt a true connection to Hayden and how she approached gun safety class. I’ll be honest, I was walking in her shoes. I felt everything she was, right up to the point of her handling a gun because I’ve never done this, but I could still imagine those same trepidations that she felt. I also respected Quinten immensely. He was patient and caring and very respectful of every woman who was in his class. As much as Quinten originally complained about teaching, he was actually the perfect team member to do it.

Lastly, my favorite part is always revisiting past characters and of course my favorite among favorites is Wren and Puff Daddy. They are there as well as several other gorgeous team members. I’m also very excited for the next book because we get lots of hints dropped here and it looks to be juicy.

As the fixer for Blackbridge Security, Quinten Lake is the man that comes in and cleans up after people make stupid decisions.

Which means he didn’t want to be the one teaching lustful women gun safety.

There were guys on the team better suited for the task.

Get in and get out, that’s his motto, something he lives by not only at work but also in his personal life.

And he could be doing just that if it weren’t for the internet.

He wouldn’t be wondering why she won’t make eye contact with him.

He’s supposed to teach her the skills to protect herself, but his ego is encouraging him to be her means of protection.

She isn’t impressed, and he’s left wondering if she’ll ever open her eyes and finally see him.