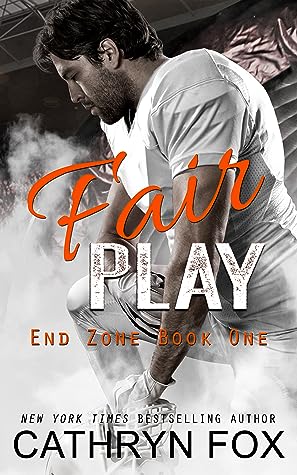 Fair Play; End Zone #1
(A standalone within a series)

This is no ordinary love triangle…can you say twins? The twists and turns that this story took had me intrigued, but also with my mouth on the floor multiple times. The shocked meme was totally me!

Within the first chapter I thought I knew where this book was headed and I thought I had the characters all figured out…well…you know what they say about assuming. I’ll just leave that thought there and move on.

Fair Play took me on a ride I didn’t expect and it was a journey that I thoroughly enjoyed along the way. Ella and Landon’s happy ending wasn’t easy to achieve…did you see my beginning sentence…yeah it’s a whole debacle that creates quite a mess, but who ever said life is fair or that something that comes easy is worth receiving.

Ella has a twin sister, Ivy, and they don’t necessarily run in the same circles. Ivy is a cheerleader and in a sorority where as Ella is quite the opposite, the sister in the shadows and into cinematography. Basically the guys on the football team don’t even know Ivy has a sister, much less a twin sister, until Ella is hired to film the football team footage her senior year.

Landon happens to notice Ella even though Ella doesn’t do anything to garner attention except be herself. Here in also lies the big differences between the sisters, Ella is sweetly charming, but also honest where it counts, where as Ivy is bold and basically mean girl hurtful. Landon is reaching a point in his college days where he’s able to admit to himself that a girl like Ivy used to turn his head freshman year, but someone like Ella is more his speed now that he knows what his end goal is going to be, the NFL. However, both girls gain his attention in one night and this lands Landon in one giant mess.

This is my first Cathryn Fox book and between friends, family, and all the drama, this journey is worth reading, especially if you love angsty, new adult books, which I happen to LOVE!

His world at Kinston College is full of parties, booze and sex. The opposite of mine.

I’m the quiet twin he never knew existed, until he heard a lie—I hated him.

Maybe that’s why he pursued me—why I became his obsession. It’s all about the chase, right?

I can’t deny that I like the attention. That my body burns for him. I shouldn’t crave him. I hate that I do. We don’t belong together.

That should have been enough to stop me from sneaking into his room, from teasing a thirst I just can’t quench…because once the hunt is over, it’s ALL over.

Unless he never knew it was me…