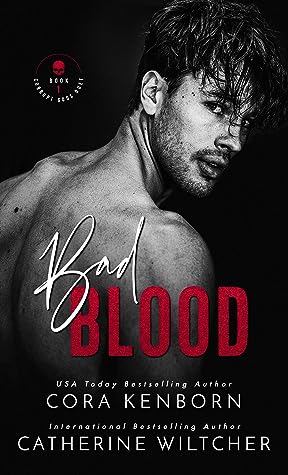 A slow burning, dark romance set in the mafia world. Two families pitted against one another, but also bound by a generational feud. Perhaps it’s time the youth finally sets turns the tide on the war.

The title of the book is perfect for the long standing feud between the Santiago and Carrera families. Bad Blood goes back long before Thalia Santiago and Santi Carrera ever met, but the feud is still in existence when Thalia walks into Santi’s casino.

Thalia is trying to help her sister, Ella, when she finds herself caught in Santi’s web and the only way out is through a forced marriage. Caught between two different forms of blackmail which led her to Santi’s casino in the first place, Thalia is just trying to survive all of the alpha males who live in her world. I like the spunk and sass in her attitude. She doesn’t take being a cartel princess lying down and it’s exactly the backbone she needs to survive as Santi’s new wife.

Santi Carrera never saw himself getting married, but when Thalia walked through his doors she presented him with the perfect opportunity to expand his business along the east coast. She was in deep and he had an offer she couldn’t turn down. There is nothing better for business than using his own personal pawn for an advantage and he will take everything from Thalia and her family while giving nothing in return.

While there were a lot of moving pieces to the mafia moments, there were some nice twists that I rather enjoyed. Thalia’s quick witted spirit and Santi’s outspoken sister were other ones. I think these bold women will be a driving force as this duet continues and I will certainly enjoy reading how they bring certain men to their knees when the time comes.

The overall romance was a slow burn, which didn’t grant a lot of tension to build between Thalia and Sant. The mounting tension was directed more between the warring families and Thalia’s personal issue, so the couple didn’t get to spend a lot of time together in the beginning. Just as the chemistry really started to mount the book ended on quite a cliffhanger…so I’m sure there will be a lot more coming in the second half of this duet.

A Santiago is a lesson in ruin.
A Carrera bleeds for revenge.

Thalia Santiago is the daughter of my enemy.
A beautiful rebel with a single cause.
Impulsive.
Fearless.
And ripe for her father’s undoing.

I recognized her the moment she stepped into my casino.
I watched her start the fires that burned her pretty fingers, and then I poured gasoline on the flames.
Now she’s in my debt, and her dues are a shiny gold ring and a vow of deception.

I’ll bend her.
I’ll break her.
I’ll turn our mockery of a marriage into a battlefield.
And that river of bad blood that flows between our two families?
I’ll make it an ocean of hate.

*This is book 1 of a new dark romance duet, releasing May 12th. Tainted Blood, book 2, releases June 9th.
**Bad Blood is set in the Santiago and Carrera worlds, but it is not necessary to have read either trilogy beforehand.