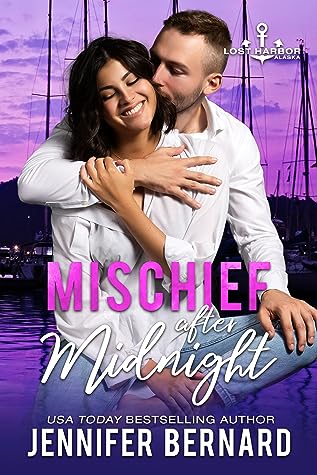 Mischief After Midnight; Lost Harbor #9
(An interconnected standalone within a series)

Fall in love with Alaska while falling in love with Toni and Bash. I was giggling and deeply sighing while rapidly flipping pages over this adorable couple so I could watch them fall in love even faster.

I love falling in love with the town over and over again, but even more with each couple that finds their couple match up. Toni and Bash are absolutely perfect and so is their story!

There is almost nothing better than when a childhood crush finally gets fulfilled. For me, those are one of my favorite and fully satisfying romance stories to read. Toni had a huge crush on her brother’s best friend, Bash Rivers, from the moment she knew what a teenage crush was. Unfortunately, in the ultimate definition of the word, Bash crushed her teenage heart when he left town years ago and he ultimately took her heart with him, unbeknowingly. Toni’s kept every relationship superficial up to that point, but when Bash comes back to town as much as she’d like to reexamine those old feelings…well…Bash is now her boss, perhaps it’s time to take a look at her life and the next phase of where she wants to go. It might be time to unfriendzone some people and take a long hard look at what she wants.

Bash owes a lot to Sally, the owner of the Olde Salt Saloon, along with the Del Rey family. When Sally decides to retire Bash can’t pass up her offer, but more than that he wants to visit his best friend, Tristan, who recently had an accident and even see Tristan’s tagalong sister, Toni. It’s been a few years since he’s actually seen Toni and once he does he likes what he sees, but things are complicated, even with the intense chemistry he feels brewing between them. She technically works for him now, she’s also the sister of his best friend who is still recovering from a serious accident and lastly, but no more important, Bash doesn’t know if he’s actually going to stay in Lost Harbor for good. Ignoring all his feelings and emotions is best, until he no longer can.

Some of my favorite parts of this book are when either Toni or Bash are in the Saloon. The patrons are hilarious, especially when Bash is first learning. They give him grief, in the best way that a small town knows how. Toni of course knows everyone, and even though Bash should since he grew up there, it’s been over a decade since he left and new people come and old people go. That saying that as much as things stay the same, things also change. Toni and Bash are perfect together for that very reason, especially in a local hangout.

I get giddy anytime someone new pops up wondering whose story could potentially be next. I  seriously could never get tired of returning to Lost Harbor. Fan for life here.

Bartender Toni Del Rey is the quick-witted queen of the Olde Salt Saloon, famous for trading barbs with grizzled fishermen and putting rowdy customers in their place. Independent and fearless, she’s only ever lost her cool over one man—the childhood crush who got away. These days she sticks to the F’s: friends, fun, and fu…well, you know. But now Bash is back, and more crush-worthy than ever. Worst of all, he just bought the Olde Salt, which makes him her brand-new boss.

Bash left Lost Harbor long ago to become a professional fighter—and to forget his nightmarish childhood. He’s only back to return a favor, but when he sets eyes on Toni, he may never want to leave again. His best friend’s little sister has gone from tomboy to tempting, from mischievous to maddening—a fact he can’t ignore while they work side by side at the Olde Salt. But between Toni’s fierce independence, his reputation as “Bad News” Bash, and a few deep dark secrets, they’re hardly suited to anything lasting.

Then again, you never know what a little mischief after midnight will lead to…

Gabriel Romero made me hungry for things I’d never wanted,
and starved of the things I didn’t think I’d ever need.
Until now…
Until him…

Good Intentions, the much anticipated conclusion to the Intentions Duet from USA Today bestselling author Ella Frank is coming June 21st and we have the smoking hot cover!

I was never the man who believed in love, romance, or happily ever afters. I was married to my work, and happy to be that way. Until one night, not too long ago, when an audacious young man lied his way into my life and showed me what I’d been missing.

Bold and sexy, with a face that could melt through the iciest of exteriors, Gabriel Romero is the one factor I never saw coming. There are so many reasons we shouldn’t work—my age, his, our career goals in life—and yet we are drawn together by a passion for music, and each other, that neither of us can deny.

I’ve always been the one to think things through, to follow my head instead of my heart. But if I don’t open myself to what’s possible, instead of thinking of all the ways this seems impossible, I might miss out on the best thing that has ever happened to me.

So I’m taking a chance, and laying myself at his mercy, opening my heart with nothing but good intentions. Only time will tell if Gabriel Romero decides to let me back in.

Words We Love By Blog – “An emotionally gripping story that had my heart from the start!”

Cali Gals – “SIGH! I am swimming around in the emotional beauty of this book.”

To celebrate the release of My Kind of Perfect, Nikki is giving away AN ENTIRE BOOKWORM BOOK BOX PLUS EXTRAS! Make sure you head over to her page and enter! https://bit.ly/3whYNrA 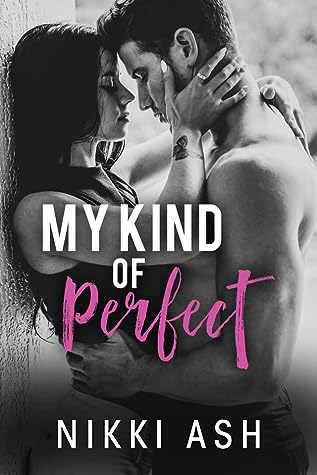 Georgia
I’m surrounded by love, yet have no one to call my own.But then Chase, my new roommate, is suddenly there.He could be the perfect guy for me, if he wasn’t nursing a broken heart.The more time I waste looking for love, the more I realize that what I want has been right in front of me all along.Falling for Chase is the easiest thing I’ve ever done, but fighting for him is the hardest.Because his past isn’t finished with him— not even close.ChaseLove finds you when you least expect it.I was only looking for a place to crash after having my heart ripped out, instead I found someone who turned my world upside down.A girl like Georgia was looking for happily ever after, and so far my life had been anything but a fairytale.I can walk into a burning building without thinking twice, but the spark I feel with her scares the hell out of me.I can’t keep watching her look for someone else—not when I’m falling for her.Just when everything starts to fall into place, I’m reminded just how messy and imperfect life can be.When the smoke clears, it’s Georgia by my side. Life might not be perfect— but our love could be.*My Kind of Perfect is the third and final interconnected stand-alone novel in the Finding Love series.*

I’m Jake Masterson, single dad, and the General Manager of Seattle’s NHL team. I walked away from a career as a player so I could raise my daughter. For the last twenty-plus years, Queenie has been my main priority, but now she’s getting married.
And there’s a small complication.
A beautiful, sexy complication named Hanna.
She’s my son-in-law’s older sister. Or at least that’s how they were raised. The truth is a little more scandalous than that.
I’ve been drawn to her from the moment I laid eyes on her. And I spent months trying to keep a lid on that attraction.
Until we finally give in.
It starts with one searing kiss, but quickly ends with us between the sheets—and in the shower, and the hot tub, you get the picture—and turns into months of sneaking around.
Here’s the problem: we live on opposite ends of the country. It can’t be anything but casual. And as I’ve already said…it’s complicated.
But when Hanna finds out she’s pregnant…suddenly things get real serious.

Add A KISS FOR A KISS to Goodreads: https://bit.ly/3w4SirW

THE BETRAYAL YOU SERVE #3 AVAILABLE NOW!!!!

The Mistakes You Make ebook: http://bit.ly/TMYM-EBOOK-FREE

The Mistakes You Make audiobook: http://bit.ly/TMYM-AUDIO-FREE

THE REVENGE YOU SEEK #1

THE DECEPTION YOU WEAVE #2
http://mybook.to/TDYW

The Revenge You Seek #1 is now available on Audio!!!
Narrated by Rachel Woods & Luke Parker
https://adbl.co/3mDa3uV

The Deception You Weave #2 is also available on Audio!!!
Narrated by Rachel Woods & Luke Parker
https://adbl.co/3vMKVFq 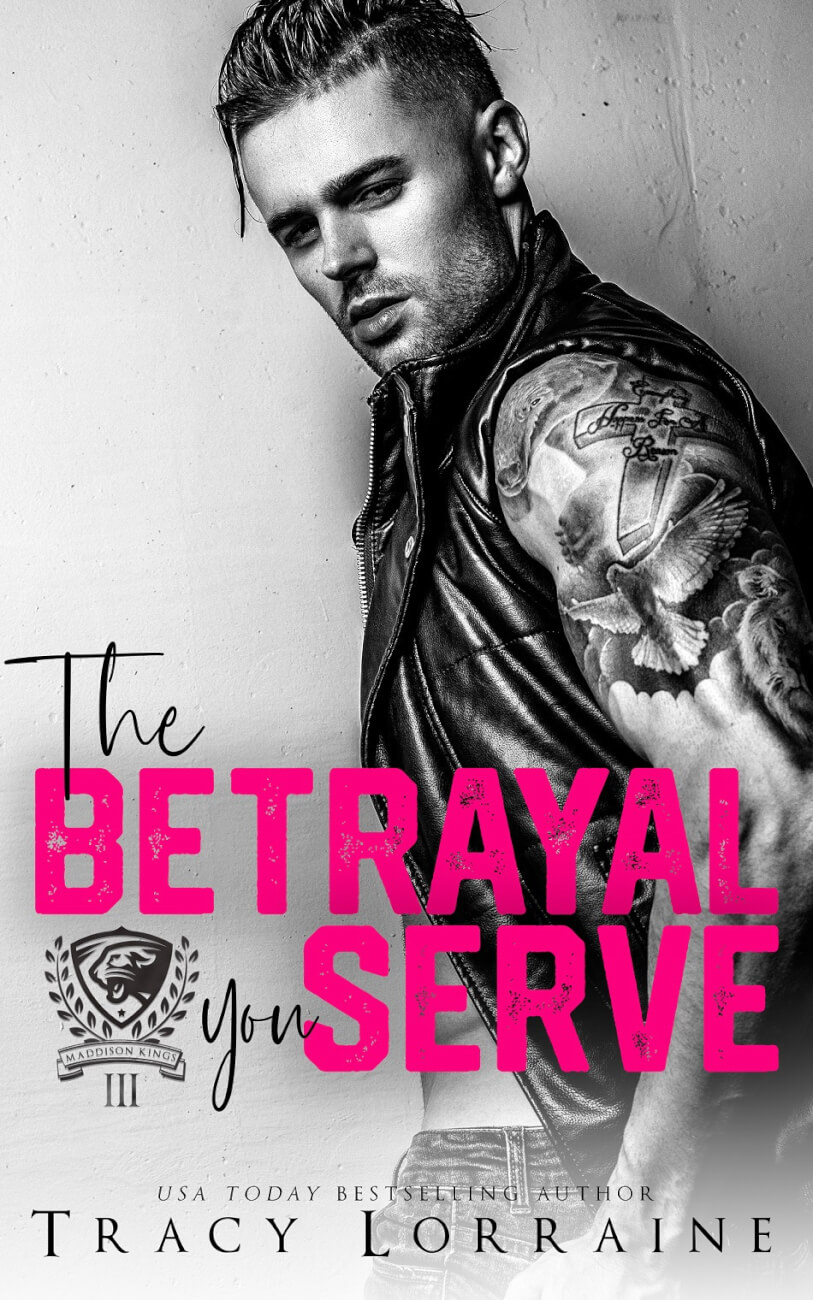 The Betrayal You Serve Blurb:

You can’t outrun the truth…

It changes everything.
Her secrets might have been exposed, but mine are still hanging over us.
A betrayal that sends her straight into the arms of another.
It’s like a knife to my heart.
But I was holding the blade.
Scarlett gave me an ultimatum, one that I need to take seriously.
Walk away from the only life I’ve ever known, everything I’ve worked for. Or lose her for good this time.
MKU was my dream, but Scarlett was my future.
If she could forgive me…

Dear Reader,
The Betrayal You Serve is the final book in Letty and Kane’s trilogy. I hope you enjoy the conclusion to their emotional and twisted story.
Still want to see more of the guys at MKU? Don’t worry, there is more to come!

About the Author:
Tracy Lorraine is a new adult and contemporary romance author.
Tracy has recently-ish turned thirty and lives in a cute Cotswold village in England with her husband, baby girl and lovable but slightly crazy dog. Having always been a bookaholic with her head stuck in her Kindle Tracy decided to try her hand at a story idea she dreamt up and hasn’t looked back since.