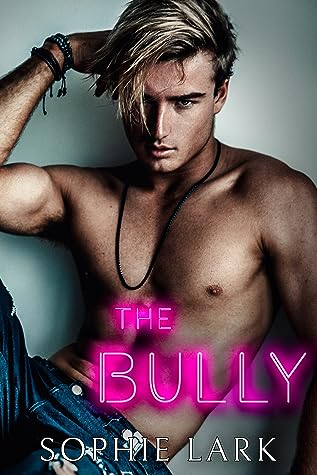 The Bully; Kingmakers #3
(#3 within an interconnected series)

Everything I was hoping for and so much more!! I LOVED Dean’s redemption story and Cat is ferocious! Absolute perfection!

I was totally fascinated by Dean from the very beginning of this series. Every villain believes he is the hero of his own story and Dean was cemented in his belief that everything he did was correct and righteous. While Dean almost killed his cousin, Leo, back freshman year, in his mind he was justified in doing so because everything that was going wrong was due to Leo. However, this murder attempt is a small part of the reason why he’s so intrigued by Cat Romero. Cat actually did achieve murdering her sister’s fiance, which is something only Cat and Dean know about. A fact that Dean uses to make Cat basically his slave, but what starts out as a fascination for Dean quickly falls into something more, something he has a hard time putting a name to, but what I find fascinating about Dean is that he is nothing but dedicated and hard working while he makes Cat his entire focus.

Cat is also another fascinating character, which actually makes her a perfect match for Dean. She began her freshman year meek and very timid, but by the end of that year she was a murderer. Now she’s beginning her sophomore year with a lot more confidence, but with a huge secret and a Russian bully who won’t leave her alone. Cat never once backs down from Dean or anyone else on campus who steps up to bother her. She has come a long way from the timid kitten who arrived the prior year. She goes into everything Dean demands with her eyes wide open, which really shows her strength and inner beauty. While Dean sees something in Cat that she doesn’t necessarily see in herself, during their time together Cat finds her confidence and her inner strength shines through. She is also friends with Leo and his inner circle, which would normally infuriate Dean, but these two are actually a bridge to helping mend a lot of fences at the school.

Both Dean and Cat come out of this year as better versions of themselves and it’s not so much as falling in love that did it, but more of having that love in their life that allowed them to finally believe in themselves and look at the world in a whole new way. That they were deserving of everything and everyone in their life instead of pushing everyone away. Finally opening up to every possibility that came their way, that is what love teaches us. I really love the message of this book and Sophie did an amazing job with their story arc.

Not only is the redemption story beautiful, but these two characters really shine together and bring out the best in one other, oh…and I haven’t even mentioned the steamy parts.  Whew…blazing…fan yourself…ultra steamy times. Can I get a visit from Dean, please? Thank you!

Next up is The Spy and where the last two books had the “on deck” character’s storyline woven throughout, this time there was only a small sprinkle here and there and the actual name of who this person would be wasn’t given. There were teasers and hints as to whom it might be, but as the title suggests it could be shocking when it’s actually revealed. I’m excited to continue and see who it is as this series has blown me away and continues to just get better and better with each book.

I Know Her Secret…

Cat is in so much trouble. She did something bad, and I saw.

I’ll keep her secret… for a price.

Poor, sweet, timid Cat should never have come to Kingmakers. It’s a place for monsters and killers. People like me.

She wandered into the lion’s den and now she’s mine.

Mine to play with. Mine to torment. Mine to break…

2 thoughts on “Review – The Bully by Sophie Lark”