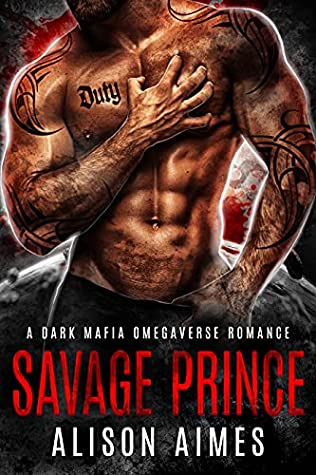 Savage Prince; Ruthless Warlords #2
(An interconnected standalone within a series)

I love returning to this dark mafia world with the large and in charge Alpha males!

Maxheim Skolov is known as the fix-it, controlled, detached brother. That was before he met his fated mate, Tess. While Maxheim is dominant to the core, he’s also caring, considerate, and totally sweet, when he’s not rutting, but really he’s the total alpha package!

Maxheim needs to be on his toes because his omega gives him a run for his money. She is everything he needs, the perfect prime omega to stand by his side, but she will push every boundary he sets for her and he wouldn’t want it any other way.

Tess has been a slave for most of her life. While she understands the omega way of life, she also doesn’t want to put Maxheim or his family’s life in jeopardy because of where she came from and what she’s done. Tess isn’t willing to just roll over and lie down, for the most part, but everytime she pushes back it’s like catnip to her alpha. Everyone in the omegaverse is after her and while she wants to do the right thing, Maxheim only wants to protect her and what’s his.

Spending time with the Skolov family gave me all the feels with lots of giddy happiness. Bonding between the two oldest brothers, now that they have something in common was fantastic, while still witnessing the two younger brothers enjoying their bachelorhood in pure naive fun was humorous.

Aimes has this world set up to perfection and returning is pure enjoyment at this point. I can hardly wait to see what’s next for this family and for the continued adventure.

He’s a notorious crime lord—and he’s on the hunt for her.

He’s mafia royalty. Worlds above her. Ice-cold and merciless. Driven by duty and dark secrets.
She’s property. Expected to submit. Imprisoned by ruthless criminals determined to break her for information she can’t afford to give.
Except there’s something different about Maxheim Skolov. Something that awakens long buried instincts within Tess and draws her toward the man inside the beast.
A force more dangerous than anything she’s faced to date.
So, she runs.
But she won’t get far.
For mafia prince Maxheim Skolov, hunting down the rebellious, spirited female is a certainty. He’ll do whatever it takes to have her kneeling at his feet once more, even begin a galactic war.

The real question is what he’ll do with her—and to her—when he catches her.

Savage Prince: A Dark Mafia Omegaverse Fated-Mates Romance is the second book in the Ruthless Warlords series. It is a scorching HOT standalone, though it is recommended to read the series in order for greatest enjoyment.

Like all the books in the series, it includes:
A ruthless alien mafia boss
An innocent heroine growing into her power
A fated bond
Plenty of hot omegaverse action
Betrayal, murder, and revenge
Serious plot twists
And an epic romance that proves love will always triumph over hate.