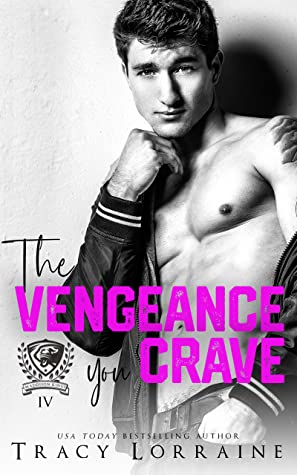 The Vengeance You Crave; Maddison King University #4
(An interconnected standalone within a series)

Warning!! This is NOT the same Luca you’ve met before!! This Luca is unleashed, out of control, and HOT!!!!!

A return to the MKU world, but this time it’s for QB1, Luca Dunn. He’s a man under mounting pressure, trying to live up to his father’s expectations while making sense of his own life which seems to be spinning out of control.

When Luca’s old girlfriend returns to town after being gone for five years, the only person to ever hold his heart, but smashed it when she left. All the pressure he’d been feeling finally explodes and all of the pent up rage, anger, and aggression explodes all over his ex, Peyton, the girl who ripped out his heart when she left.

When Peyton left Rosewood five years ago, she has missed Luca every day since, but when she comes back to town and she sees Luca for the first time she meets the angry man in place of the boy she was once in love with. Where she once thought she could be friends with Luca again, she now doesn’t see much hope of rekindling any kind of relationship with the angry, bitter Luca.

Peyton has a lot on her plate with finishing her degree, working, and helping out her family to worry much about making amends with a broken Luca, but no matter where she turns, Luca seems to be taking up residence and he’s making her life miserable at every turn.

Luca is a bad, bad, bad boy and certainly not the hero in this story. Like a lion with a thorn in his paw, he lashes out at the girl who broke his heart years ago and doesn’t hold back for anything. There is a completely dark side to the golden boy we’ve previously met. This is a man who holds secrets and grudges and has a deviousousness about him that once he lets out is highly delicious.

Peyton is someone who seems like she’d be a good fit for Luca, but she also holds her own secrets. She certainly knows how to work a room full of rowdy, drunk men so she isn’t weak and I like her spirit, she doesn’t just roll over and give up.

I love the connection between Rosewood and the prior MKU students and I really can’t wait to see how the cliffhanger plays out in the next part of this duet. I have a lot of theories running through my head, but Tracy always throws in a good loop so I’m really excited to see how it all plays out and more importantly how Luca and Peyton are going to come out in the end.

It’s been almost six years since she ruined what we had.

Her lies shattered years of friendship and ripped apart the future we planned.

After I called her a liar and revoked my trust, she left town and never looked back.

In a cruel twist of fate, she’s returned. But I’m not the wounded boy she left behind.

I’m a man now. A man full of anger, resentment and loss.

Darkness consumed me after she left. An unforgiving black hole where my heart used to be.

If she thinks she’s already seen the worst of me, she’s wrong. Dead wrong.

Peyton has only experienced the very tip of the iceberg when it comes to my darkness.

I’ve craved vengeance for her lies, and now is the time to make her pay.

Dear Reader, The Vengeance You Crave is the fourth book in my Maddison Kings University series and the first in a duet for a new couple. It’s a dark bully romance that contains mature content and demanding alphaholes that some readers may find disturbing. You have been warned.

2 thoughts on “Review – The Vengeance You Crave by Tracy Lorraine”