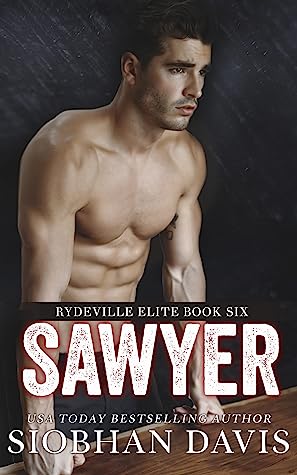 Sawyer; Rydeville Elite #6
(#6 within a series)

The Rydeville gang is back and so are the Elite secrets. Sawyer is a book full of suspense, intrigue, and dark themes, but more importantly it’s a story where love and acceptance is truly the underlying theme.

Sawyer Hunt’s story has been brewing for awhile and with his cool personality and bi-proclivities in the bedroom it was hard to say exactly how his story would play out once it arrived. After reading Sawyer, I couldn’t have been happier with how it all ended and what is still to come for the Rydeville group that just gets bigger in their happily ever afters.

Everyone is back from the Rydeville series; Abby, Kai, Jackson, Nessa, Drew, Charlie, Demi, Xavier, and Sawyer, and a new addition Sydney. Everyone pitches in to help solve more Elite involvement that is not only hurting the Hunt’s tech company, but hurting Sawyer and by association Xavier Daniels.

I love every single moment that takes place on the page with anyone from Rydeville. For example; witnessing the love between Abby and Kai from the POV of Xavier, who has no trouble calling Kai out on his caveman tendencies, it is funny and completely endearing all at the same time. OR, attending Jackson and Nessa’s wedding through the POV of Sawyer it is also romantic and a little heartbreaking all at the same time. Sydney too is drawn into the Rydeville world and envies what Sawyer’s friends have. She may be new to this world, but she quickly will grow on you.

This entire series is best read in order and enjoyed when you know the world and its inhabitants. For the most pleasure I would recommend starting at the beginning of the series before jumping into Sawyer.

There is still more Rydeville to come with Drew getting his own book and the Anderson boys aren’t quite finished yet either. The Rydeville Elite will return and I’m looking forward to more from this world.

Torn between duty and desire…

Sawyer Hunt has always been confident with his place in the world. He knows what he wants, conceals his painful truths behind a mask of cool indifference and keeps his circle small. The only person who has ever come close to smashing through his inner walls is the one person his parents will never accept.

Xavier Daniels is sick of being Hunt’s dirty little secret. When he fled the ugliness of his past, he swore he would never again hide who he is. Or let anyone hurt him or make him feel ashamed. So, discovering the man he’s in love with is engaged to some mystery woman devastates him. Forced into making the only decision he can, Xavier locks up his heart, determined to keep Hunt out for good.

Sydney Shaw is the bane of her father’s existence. But he’s finally found a way to end her rebellious streak—marry a virtual stranger or be cut off forever. Hunt could be a great husband, if he wasn’t such a cold, moody jerk and she wasn’t still hung up on the guy who broke her heart at fifteen.

Marrying Sydney to save his father’s company is a sacrifice Hunt will make because he suspects the elite is involved, and it’s up to him and his friends to stop them. With his heart also on the line, Hunt is determined to end the threat quickly or risk losing the one person he now realizes he can’t live without. Consequences be damned.

Sawyer is the sixth book in the Rydeville Elite world, and it is recommended to read the previous books in the series first. This romance contains MM and MF scenes, in addition to some dark themes/references. There is no menage. It is recommended for readers aged eighteen and older. Ends with an HEA for the chosen couple.