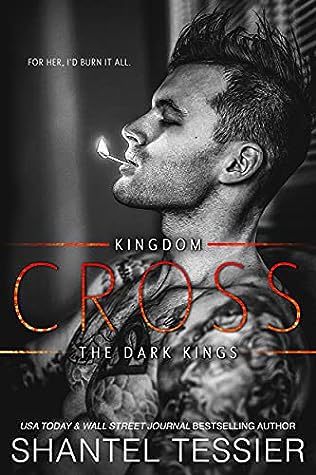 Cross; Dark Kings #3
(An interconnected standalone within a series)

An adrenaline filled ride filled with Kings and Queens. It’s written by the Queen of smexy darkness so of course Cross lights up the pages with all of his smolder and grit, but not to be outdone, his gorgeous woman is right by his side tossing the match on anything the Kings can’t bury in the Vegas sand.

Alexa and Cross are a perfect match for one another. From the very beginning of the story Cross is a character that is full of raw emotion. His honesty, his pure hunger for basically everything, including Alexa, burns through him. He doesn’t do anything halfway, so when he decides he wants her, that primal desire ignites into a carnal hunger that even he can’t explain…except that it could be love. However, will Alexa love him, the true him, once all the smoke clears? The monster that lives inside and craves the fire and wants to watch the world burn.

Alexa, aside from Jasmine (and yes, I know she’s still just a secondary character), has turned into one of my favorite heroines in this series. I love that she doesn’t play games, gets offended easily, or run screaming from things that go bump in the night…things that the Kings are notorious for. Alexa is bold and she isn’t shy about what she wants from Cross, which initially is just time spent in his bed, or over a table, or in a chair, or…well you understand. She isn’t looking for anything long term with him and she has no qualms about women who just want a good time and pretty much throughout her time spent with Cross, he’s the one who has to approach her, or more times than not-tell her, because he is a caveman, and every single time he draws a line in the sand and wants more she likes to argue about it. Their relationship, per say, is all kinds of adorable, in the most non-adorable way possible because they are not pursuing a relationship AT all, but sort of stumble into one. Like I said, they are perfect together because they are both a little clueless when it comes to relationships and yet they are both surrounded by lots of couples.

Never forget that this is a dark, mafia book. There is a lot of plot going on around them, but all of that is just frosting on an already delicious cake. Shantel interconnected all of the Kings and other secondary characters extremely well throughout the book to really keep things going while Cross and Alexa try to figure each other out.

Cross has become my favorite King, so far. However, Bones is stacking up some promising factors, but this book is not about him, so back to Cross who I’m completely in love with. Cross is damaged, there is no doubt about it, but I’d also say of the four Kings, he’s the softest. That is like comparing him to a porcupine I know, but I’m sticking to my comparison. Porcupine’s afterall still have a soft underbelly and Cross has a totally soft center when it comes to Alexa. These two truly are a perfect match.

This book has a lot of interconnections to the rest of the series and while Cross can be read as a standalone, it would be better enjoyed if the entire series is read in order.

CROSS
Have you ever stood next to a fire and felt the heat of it on your skin? Stared into the flames and thought how amazing it would be to be that free? It changes direction with the wind, destroying everything in its wake.

Alexa was a wildfire that torched everything she touched, and I couldn’t wait to be consumed by her.

She was off-limits. Even though I promised to stay away, I couldn’t resist. She was the spark I had been missing in my life. The fire I craved. I knew from an early age I was destined to burn in hell, but she was born to walk through fire.

ALEXA
I was single-minded, focused, and independent. Just how my mother raised me. I didn’t have time for anything other than myself and work.

Funny how everything can change in an instant when you least expect it.

A King entered my life.

What was supposed to be one night ended up being too many to count. He was afraid that I’d see his darkness, but I couldn’t get enough of him.

After all, a fire burns the brightest in the dark of night. And it only takes one match to cause total devastation.

CROSS is the third book in the Dark Kings Series and can be read as a standalone. Due to mature content and themes this book is recommended for readers aged eighteen and over. This novel may contain triggers.