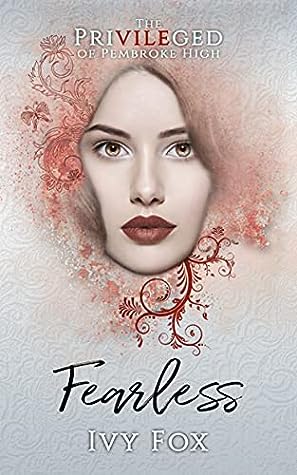 Fearless; The Privileged of Pembroke #5
(#2 within a duet, #5 within a series)

Staying up late to read Fearless was sooooo worth it!! The angst, the emotion, the steamy love triangle…this book has all the feels.

Fearless is exactly what a love triangle/ménage should tackle when it comes to the deep soulful emotions, twisted up feelings, and gut wrenching angst. So often a throuple jumps into a relationship and it’s happy from the get go. I understand throwing out reality and it’s a fiction world, but there is no relationship, no matter the amount of people that are in it that is super easy, so I love that Ivy tackled the heart of every relationship, especially one that involves multiple personalities.

Elle, Chad, and Saint all revolve around each other and have for years. Elle and Chad have been friends since kindergarten, while Chad and Saint developed a relationship later on. While it was originally Chad that was the glue between the three of them, not only being attracted to both, but also forcing the three of them to hang out, things changed and evolved, like teenage hormones do. Elle and Saint couldn’t stand one another sensing the other as competition for Chad’s affection, but as we come into Fearless that all comes to a head as they make Chad decide, choose one of them because they no longer want to share. When Chad can’t and won’t, Saint and Elle turn towards each other both in heartbreak and comfort and their once rivalry turns into something a lot more like love, but did they really make the right choice in cutting out part of their threesome?

It’s crazy how close hate and love walk that fine line, but Saint and Elle find out just how much they have in common while Chad slowly falls apart. Even while this couple grows together, which I LOVED how much Saint grew as a character, having a part of their original throuple gone gnaws at both of them and neither of them know how to get back what they had before everything fell apart.

Chad delves into some deep, dark places inside himself. He’s never been without Elle as his best friend. The growth he goes through, learning who Chad is without his sidekick, without someone to take care of, even without Saint to feel like he needs to correct all the time. Chad pulls out the version of himself that actually was buried deep and it’s one that the three of them needed more than they ever realized.

Elle goes through more ups and downs than anyone in this book, however, she’s probably the strongest person out of them to handle it and survive it, but she loves that she has support to lean on when the going gets tough. No matter what age she is, one of her guys was by her side to hold her hand or hold her tight, right when she needed it, but Elle was always strong enough to set things right and that is why this ménage works so well.

Lastly, Saint. Although, I would never put Saint last. He was pretty much everything in this book. His character growth was through the roof. He was sweet when needed, yet domineering when he had to be. He was caring and thoughtful, but his outside shell still screamed thug to those who didn’t know him. He was becoming the glue, that connecting middle piece, and Saint was everything Elle and Chad needed to complete their lives.

The intimate moments are crazy hot, no matter who is involved, but while they are also steamy, they also crack open emotional moments too. Nothing happens without purpose.

Since the Pembroke world is all interconnected the Grayson brothers are also dealing with their own chaos during this book, but Elle’s story is written in a way that it’s a complete standalone from her brothers. I will also say the same thing about Maya’s story. Everyone connects at some point in time, but don’t worry if you aren’t caught up yet, it will all make sense when you eventually read those books.

Whoever said when life hands you lemons to make lemonade can suck it!
Everything is falling apart.
Rome is in jail for murdering our father.
Holland is in the hospital fighting for her life.
And I haven’t spoken to my best friend in God knows how long.
Oh, but it gets worse.
I’ve fallen in love with my nemesis, too.
It might not seem like a big deal to most, but it sure is to me.
Especially since my heart still longs for the green-eyed boy, I vowed to love for eternity.
But I’m not the only one suffering.
Saint is too.
I feel his misery in every kiss he gives me, in every caress and embrace.
We’re not whole.
Not as long as we don’t have him.
If I want to heal all three broken hearts, there is only one way to go about it.
And that is to be fearless enough to fight for our happy ending.
They’re both mine, and I won’t let either of them go without a fight.

*Fearless is the last book in the duet focusing on Elle Grayson’s love triangle in The Privileged of Pembroke High series.
*This is a bully/enemy-to-lovers, friends to lovers, contemporary romance, full-length novel.
*Recommended 18+ due to mature language, sensitive content and adult situations featuring m/f, m/m, m/f/m.

Must be read in order