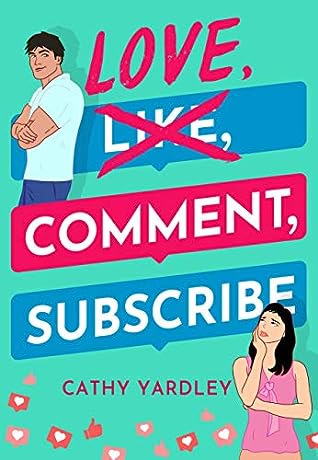 I connected to this book on a lot of levels.  I loved both characters and empathized with them, but more than anything I loved how they brought their unique brands together to collaborate and create something that both of their audiences could enjoy. Uniquely brilliant!

Lily and Tobin are both influencers on YouTube. While what they vlog about are completely different things, Tobin is more of a gamer and unique commentator on random events and Lily is into beauty and fashion, how in the world could these two worlds ever combine to form a partnership in a collaboration? Especially when they can hardly stand to be in the same room together for a few minutes. It’s actually that premise that pulls their viewers in and makes the clicks and comments roll out. Fiery chemistry that began long ago when they used to banter back in high school. Would they kill each other or make out like mad?

The entire concept pulled me because honestly, I had to know that answer just like their viewers. I seriously wanted to know what these two were going to do to entertain two entirely different vlogging audiences and also if Lily and Tobin were going to take things further. There was no creativity left behind because what these two came up with was pure brilliance!! Every moment between Lily and Tobin was fantastic.

Not only were these two vloggers a unique collaboration, but it also ended up changing the trajectory of both of their lives. Is there love involved…it wouldn’t be a romance if somebody didn’t fall, right? But, more than that, these two completed the other more than they ever thought possible.

When they should have ended up killing each other, they end up…well not. It’s sweet and funny and all things fun that I love in a great book. I’ll definitely be picking up another Cathy Yardley book again.

Back in high school, Lily Wang wanted to be popular, but she considered herself lucky to be part of a tight group of oddballs and honors students called the Nerd Herd. Now, at twenty-eight, she feels like she’s finally on the cusp of succeeding as a beauty influencer—if she can hit five million subscribers, brands will take notice and she could get her own makeup line.

Fellow Nerd Herd alum Tobin Bui has had a lot of success as a YouTube gamer. But the road to online stardom has been rocky. First, he disappointed his parents by dropping out of college, and now, after years of pranks, skits, and playthroughs, he’s struggling to come up with new content to satisfy his ever-growing fan base. His agents say he needs cross-audience appeal, a new twist.

When Nerd Herd frenemy Lily approaches Tobin about teaming up to do a video to bolster her brand and reinvigorate his, he agrees. But when their first collab video goes viral, their relationship heats up too. With the whole internet watching, will these two former misfits finally realize they’re perfect together?

Charming, hilarious, and emotional, Starry-Eyed Love is Helena Hunting at her very best!
🔥🔥TEASER BLAST🔥🔥
Kiss My Giraffe by Erin Nicholas will be here May 17th!!
#COVERREVEAL #PREORDER Football is one hundred percent the focus of my life—until a squawking toddler, with a temper to rival my own, lands in my lap and flips my life upside down.