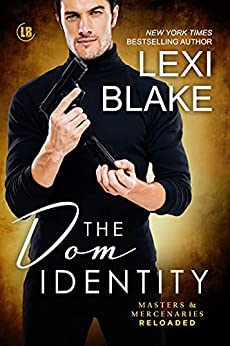 The Dom Identity; Masters and Mercenaries #23, Reloaded #2
(#2 within a series)

Family, intimacy, spies, and all the loveable sarcasm I adore while reading my favorite series. Everything right and perfect was in The Dom Identity, including talk about body positivity….YESZZZZ…and finding joy before life passes you by.

Lexi Blake has never shied away from strong women or the leading men who bring out confidence in their partner or partners. In this newest addition to one of my all time favorite series, Michael Malone and Vanessa Jones crack open body image, self esteem and how it all ties in to how a person projects what they feel and what others actually see whether they are in person, on stage, in the tabloids, etc…

It’s hard enough for an everyday person to navigate the world and enjoy the body we live in, but for people like Michael and Vanessa, who live more in the world’s eye, criticism is an everyday occurance. These two also circle what is involved being a couple in the eye of the public. Love is work for a normal couple, but elevate it with paparazzi and constant social injustice and a relationship seems almost impossible.

Michael Malone comes from a world of money, he’s no stranger to what the media can get wrong, but he’s also tried to live apart from it. Having a career outside of the oil business where the Malone name is tied too Michael sometimes feels disconnected from his blood relatives and the family he’s tried to create. Some days he’s so alone in the fact that he walks the line between two worlds he often wonders if he made the right decision, that is until he meets Vanessa Jones and sees that same loneliness in her.

Social media has given the world a way to project a very one dimensional view of any subject. People see what they want to see and let’s face it, a lot of people are extremely harsh. Vanessa Jones, also known as Vanessa Hale on screen, hasn’t had the best of luck when it comes to her career. Well, she has and she also hasn’t. While she became famous with her looks, those looks also brought her criticism when it came to having a brain in her head as she sought out different roles. For her beauty, she must have used it to get ahead, probaby on her knees. If she asserts herself, then she’s a cold, calculated b**ch and has emotional issues and her career suffered. Some days being a woman is not easy. It’s lonely and becomes hard to trust those around you and Vanessa gives an excellent view into this life that many crave, but perhaps isn’t all it’s cracked up to be once you reach a high level of fame. Everyone thinks they know you, but do they really? Vanessa meets her other half and being with Michael is like coming home, until she learns the truth about why he’s with her.

Michael is hired to investigate Vanessa, initially for Julian Lodge because Vanessa is working for his wife Dani. Michael should be honest and tell Vanessa why he’s there, but once he gets to know her, the real her, he doesn’t want to chance losing her. Where is Ian’s inner monologue when he needs it, aside from the one telling him to wear a condom.

I loved returning to Julian’s world and revisiting a lot of the members there while Michael and Vanessa are visiting The Club. Plus the younger generation, like Kyle, attend The Club because they don’t want to see their parents parading around naked at Sanctum. It’s too funny to hear them talk about it and fake gag, I giggle every single time. AND, the ongoing feud and frenemy status between Ian and Julian is always hilarious.I can’t get enough of the sarcastic ribbing, so many good things in this reloaded series.

While the Malone family has been present in the last few novels and novellas, we get to know them even more along with the rambunctious grandchildren. The growing families is super exciting on every level and I wish I was better at keeping track of all the children, since I know there will be match ups within the McKay-Taggart agency or interconnected worlds. I can hardly wait to see each dad freak out when that happens.

Lasty, since I know I’ve already gone off tangent, while I still love Ian and his outlandish, yet honest, remarks “Michael did what all of my idiot employees do and fell for the client. Trust me. I’ve seen it a thousand times.” As a secondary character, it was truly Kyle who stole the show in this book. Kyle reminds me of a young Tag, so I can’t say Ian isn’t far from my mind or still my favorite, but Kyle is sneaking up on Ian. Kyle is full of the Taggart sarcasm (most likely because he is the stepson of Sean Taggart and spent time with the entire Taggart clan as a child), but Kyle also has a very similar background to those he now works with. He’s carrying a dark secret, which makes him hold back on friendship, love, deep connections of any kind, but he has these moments of honesty that are leading up to what will be a fantastic book. I can hardly wait!

A man with everything

Michael Malone seems to have it all. A wealthy, loving family. A job that fulfills him. Friends he can count on. But something is missing. He’s spent years watching his brother and close friends get married and start families, but it hasn’t happened for him. When an assignment comes up to investigate fallen Hollywood star Vanessa Hale, he jumps at the chance. She’s gorgeous and potentially deadly. Playing the spy game with her might be just the thing to take his mind off his troubles.

A woman with nothing left to lose

Vanessa Hale had big dreams that ended in scandal. She returned home with nothing but heartache and the desire to find her mother’s killer. The trail points to someone at Lodge Corp, so taking a job with Julian Lodge’s mysterious company is her best option for finding the truth. While she hunts for a killer during the day, she hopes to find some solace at night in The Club. Meeting the gorgeous, sexy and seemingly kind Michael Malone, their chemistry sparks in a way she’s never felt before, and Vanessa thinks maybe her luck has finally changed.

When Michael’s true motives are revealed, she will have to find a way to forgive his betrayal. The killer has made Vanessa their next target. Working together and stopping this monster is the only chance for them to have the real love they both deserve.

2 thoughts on “Review – The Dom Identity by Lexi Blake”

🔥🔥COVER REVEAL🔥🔥
❄️🏍 A Very Naughty MC Christmas 🏍❄️
💥💥OUT NOW💥💥
It was just another day in the Emergency Department -- until she was wheeled in through the doors...