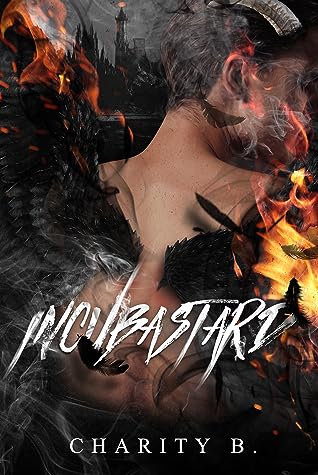 Funny, entertaining, and disturbing, but all in the best way possible! I LOVED IT!!

Loch is pretentious d**k, but he’s also thousands of years old and a princely demon, so his attitude makes sense. I loved everything about Loch, but I’m also glad I’m not a soul that has been sent down below for him to torture. His job is to literally punish evil and wicked souls and he thrives off of it, maybe not as much as likes to slake his lust, but a lot of times they go hand in hand, so that is a bonus of his job.

Loch’s attitude and lack of human morals really make sense when he is summoned to earth, but the more I got to know Loch those human morals we sometimes hold so high, well, honestly they start to grey. He may not be prince charming or even a white knight, but I would definitely put him in the anti-hero or dark knight category. Loch is protective of those who fall within his orbit, and while he certainly has zero filter and doesn’t understand a lot of human ways, he has a ton of character growth. Loch is like a bumbling toddler in manners with a crazy high libedo in the bedroom and serial killer tendencies with those he cares about who get hurt. He’s perfect!

Mishka didn’t mean to literally summon a demon into her life, she was both trying to move on from her cheating ex and help out her best friend with her witching spells (Leena is a ton of fun as a secondary character). Mishka honestly didn’t think anything would happen, but when a gorgeous man appears in her home and he told her he wasn’t leaving her life until they supposedly consummated the summoning. Yeah, she might feel like she was going crazy when he first appeared, but she also wasn’t crazy enough to sleep with a demon.

No matter what Mishka does Loch won’t leave and she refuses to stoop into sleeping with him. He’s crass, bold, (he’s sexy, but she won’t tell him that) and he continually says the wrong thing. However, when he stops long enough to actually not act like the demon he truly is, she actually starts liking him. What the h.e.double l hockey sticks could she be thinking? She should really start to question her sanity because they could never work. Even when it’s safe to say…she might actually be falling him. A demon and a human has that ever worked in history?

I loved everything about this story, but I especially loved how Charity twisted an old tale (yes, the oldest tale ever) into her own story. I also loved the inclusivity of love and how souls played into who we are vs. the human views we place on people. Everything was absolutely brilliant!

There was a lot of suspension of disbelief that went into reading this story, but I feel that is true with any paranormal book. The gore is high, but weirdly enough because this is a completely fictional world, the disbelief made the gore easier to swallow. However, Charity put the warnings in there if graphic violence is not your thing. 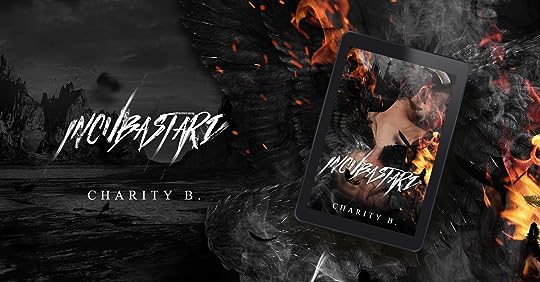 Mishka
Angels, demons… the afterlife.
I’d always thought they were bullshit.
Until all my misguided beliefs were proven wrong by an infuriating, flippant asshole with horns who has no concept of boundaries.
Summoning him was never the plan, especially since I’m not willing to do what it takes to send him back.
If I’ve learned anything from Loch, it’s that preconceived ideas are usually false, and the truth is much messier than fables.
The theory of good and evil is flawed.
Nothing is that simple.

Loch
The only side of human nature I’ve ever encountered is vile and perverse, depraved and cruel.
However, Mishka’s none of those things.
She’s an insufferable, snarky creature who makes me question everything I know about myself.
The longer I’m with her in this world, the less desperate I am to return to mine, which is absurd.
I am son of Asmodeus.
A prince spawned from lust to torment the damned.
The mortal realm is not where I belong.

Incubastard deals with Christian lore that does not align with the Bible. It is completely fictional. If this will make you uncomfortable, please do not read this book.

Content Warning: This novel contains graphic scenes depicting blood and gore along with sexually explicit content and violence. For mature audiences only. 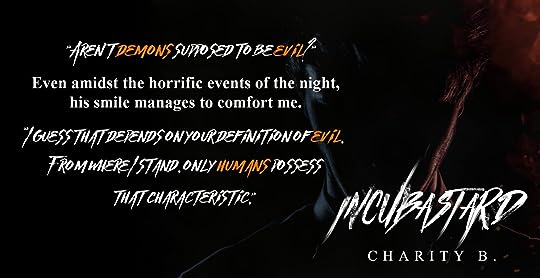 1 thought on “Review – Incubastard by Charity B.”