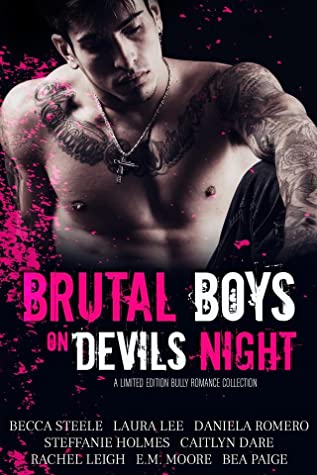 Callous Boys; Callous Boys of Crystal Cove #0.5
(A prequel to a new series)

What a fantastic beginning! High emotions with thought out plot and drama. I’m already hooked on the Callous Boys!

Andi, Vaughn, Nico and Cruz have been best friends for their entire lives. As they grew and hormones became involved, noticing their hot friend was growing boobs, and boys being well….boys. They had a friendship that they didn’t want broken by Andi’s boobs, but that they also were hoping would evolve into something more given time and maturity.

Vaughn, Nico, and Cruze made a pact between the three of them, that none of them would make a move on Andi until she was ready and showed an interest in one of them, since all three of them were interested in her. Unbeknownst to them, as they kept their feelings hidden for her, she also did the same. Andi’s feelings for each boy never distinguished between each one, but only grew stronger for all of them over the years as she wanted each one equally. In her world she didn’t know how that would work, so she kept quiet about her feelings, since it was all or none. That is until a new boy, Hunter, came into town.

Everything changed with Hunter began flirting with Andi. Finally fearing they may lose what they never had, it was time to make a move, but how do Vaughn, Nico and Cruze decide when none of them have ever let Andi know how they feel about her? How do  they threaten their friendship without losing everything between them?

I loved that this poly relationship worked slowly into what they might want. Just because they had all been friends for years didn’t mean they knew how to work a romantic relationship. Guys in general can be super territorial and Nico, Cruz and Vaughn were no different. Cruz is by far the most laid back of the three, but he also understands the value of losing time and doesn’t want to lose Andi at any cost so he’s all in no matter what it takes. While Nico has a tougher home life, at least in the thought of living a poly lifestyle, he is closer in wanting to share like Cruz is. However, he’s also all guy when it comes to sharing his toys, like Andi…sharing is hard, just ask Vaughn who hates sharing anything. He’s a total caveman. While he’s never truly had a problem when it came to their friendship, they all know within a romantic relationship Vaughn would be the most possessive, but Andi also knows deep in her heart she can’t love one boy without loving all three.

This relationship grows slowly while they talk about the logistics, reality, and emotional ramifications of really diving into it. There are some very cute and funny moments that come out of those talks because let’s face it…how does it all work and do the swords cross? LOL

There is also a mysterious, mafia element that I’m dying to know more about. There is some shady business going down within the families, so what is exactly happening?…It’s all clouded in secret with a big cliffhanger to boot! I’m so there to find out what happens as the story continues because I need to know!!

I grew up with three boys who vowed to always protect me.
Vaughn, Nico, and Cruz started as my neighbors.
Then, they became my best friends.
And in the end, they were my entire world.

We thought we were invincible. That nothing and no one could ever tear us apart.

It’s funny how murder has a way of changing that, isn’t it?

*CALLOUS BOYS is a 45k word prequel to the Callous Boys of Crystal Cove series. This is a dark (#whychoose) reverse harem story, meaning the heroine winds up with three or more love interests by the final installment. This book may contain triggers for sensitive readers.  Due to mature subject matter, it is recommended for readers 17+ only.

CALLOUS BOYS is available in the Brutal Boys on Devil’s Night Anthology on October 1, 2021.