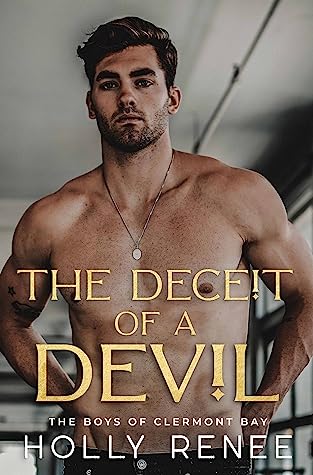 Redemption, heartbreak, and big angsty emotional turmoil with lots of tears…Holly Renee pulled out all the stops on the way to second chance love for the second half of this duet.

Carson and Allie have danced around each other for years….YEARS!! Of course their love story was going to be big with all the feels and lots of bumps. They were not going to escape each other without bruises, but dang…grab the tissues before getting comfy. Their story is hard won.

Yes, Carson had a lot of groveling to do after Eli let the cat out of the bag on the virgin bet right at the end of book one, but honestly, their hurt runs so much deeper than any bet. Allie deciding to sleep with Carson was because she finally felt comfortable with him again, she was hurt only because she figured Carson was playing her all along. Carson had been mistreating her for years and was she wasn’t sure if she was being duped or not. Sleeping with him was just the top of her bad decision making when it came to him and she was more angry at herself for falling into his traps.

Trust is a delicate thing and just at the moment Carson had been earning it back, Eli broke it for him. Carson finds himself at a loss. He never meant to hurt Allie and he could have cared less about the bet, but how does he get her trust back when he’d barely had it to begin with? He works hard at trying to earn it back, but Allie isn’t easily swayed by his pretty words this time around.

These two have so much to work on in regards to past hurts, present hurts and how not to hurt each other in the future. Sealing up those cracks so they stop causing damage and yet also focusing on just being happy is a lot harder than it looks.

This story is all encompassing with the emotions, plus full of tons of steam!!  Carson and Allie are actually an amazing couple, now there is one couple left in the Clermont bunch…will they or won’t they? I’m excited to see how the last ones standing play out.

Sinless. Stunning. Damaged. Tempting. Allie Taylor had been the girl I hated for as long as I could remember.

And now she loathed me just as much.

It didn’t matter that I betrayed her to save her.

Completely devastated and infuriated by my dishonesty, she had no intentions of ever trusting me again.

Her trust was shattered, her hate raging on with each second. She would never look at me the same again.

Our past was full of pain and lies that could never be forgotten.

I knew what I did was irreparable, but I refused to let her walk away without another chance.

I should have left things in the past.

I needed her. Even if it cost me everything.