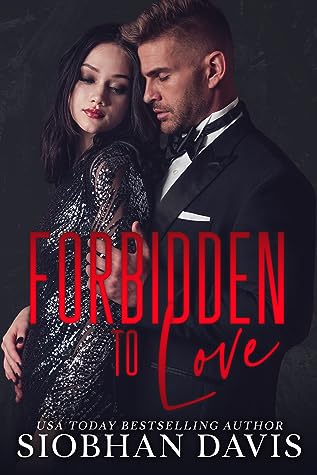 Forbidden to Love
(An interconnected standalone)

Forbidden to Love is so appropriately titled because this book made me sad, sad, so super sad.

Growing up in the mafia world there is no wiggle room when it comes to the rules. Natalia Mazzone has been in love with Leo Messina her entire life, but Leo works for her father and Natalia is the only daughter of a mafia don. Her marriage was decided and contracted before she even knew what love was. Her life wasn’t her own, her feelings never taken into consideration, her choices not up for discussion. Natalia was a pawn to strengthen the family and nothing more.

It’s sad…no matter how much Natalia and Leo want to be together their literal lives are on the line if they tried to be together. Leo would be six feet under if he took the liberties he wanted to, the very ones Natalia wants him to, but also realizes that her father wouldn’t hesitate to follow through on his threats.

Years go by and they each do their duty, and it’s so sad…have I made my point…,these two never stop loving each other even though they can never be together. It’s heartbreaking as they go on with their lives, but only living with half of their soul. My own heart was broken throughout this book as everything played out.

This story contains heart, suspense, angst, and most of all tons of emotion. Siobhan is the queen of pulling heart strings and this forbidden tale proves once again that she is the master of pulling every last one.

Natalia Mazzone has grown up knowing she is promised to a made man. As the only daughter of one of New York’s most powerful mafia dons, she knows she can’t refuse. It’s her duty, and she would never dishonor her beloved father.

But the man she’s promised to is a monster. And there is nothing but torture, pain, and heartache lying in wait.

So, she grabs happiness when she finds it—in the somewhat reluctant arms of Leonardo Messina.

Leo is her brother’s best friend. A soldato for the Mazzone famiglia.A man with strong ambition and an even stronger resolve. He won’t allow them to give in to temptation, so Natalia is forced to love him from afar.

Until one forbidden night changes everything, and she readily hands Leo the key to her heart.

Leo risked everything for the one woman he can never have. He doesn’t regret it. It saved Natalia from a life of hell, but his actions set her on a different course.

One that doesn’t involve him.

Years have passed, and his feelings remain the same. Yet he keeps his distance, dedicating himself to his new role as underboss to Bennett Mazzone, while the love of his life is married to another man.

Until a twist of fate puts Natalia in his path again, and this time, he is powerless to resist.

Available to preorder now at a special new release price:

1 thought on “Review – Forbidden to Love by Siobhan Davis”