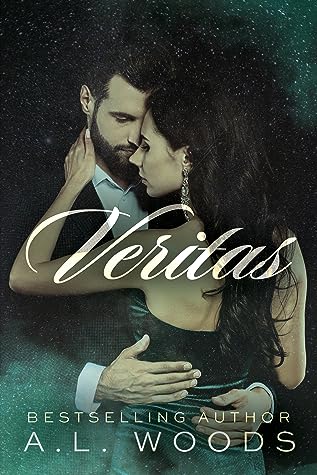 Veritas was a mixed bag of emotion for me and those emotions centered mostly around Maria.

I didn’t like Maria for the first quarter of the book. She’s harsh, closed off, so deeply seated in her trust issues that I honestly didn’t think she’d ever turn around for anyone, but…and this is a big but…I understood where she was coming from and this is why I continued to root for her. Why I continued to read and finish the book. There are redeeming qualities from her abrasive, cold demeanor and once that shell comes off Maria is just a woman like the rest of us.

Maria not only works in a man’s world, she works in a misogynistic, patriarchal, man’s world as a lawyer. To top off her daily work life, she also comes from a heritage where women have their place and she shouldn’t push for more, want for more, or be seen beyond their womanly assets. Maria is constantly bombarded by the men she works with as a lawyer, and she is bombarded by her Portugese family. If there is one thing I hate in this world it’s when women are told we are to limit ourselves based on our gender. Again, this was a big reason why I rooted for her, I understood Maria for pushing back against the glass ceiling and wanting more out of life. I just hated that she put boundaries on her heart to do it, but I’ve personally known many powerful women just like her who have done the very same thing. Men in her very same position seem to sacrifice the way women do and as much as I wish for the world to change, we still have a long way to go.

Jordan came into this book with some trust issues as well, but he was much more self aware of where his stemmed from. He’s been divorced for several years, he’s a single father, and he’s a successful lawyer. Is this the very cliche I mentioned above, perhaps, but he was much more likeable from beginning all the way to end even with the burdens he had to bare. I can’t say if it was being a single dad that drew more empathy, his failed relationship or his strong personality of never giving up that exactly pinpointed his likable personality, but the combination of Jordan was intoxicating. The man knew how to push Maria’s buttons and between the two of them they were a good match.

I will say I hated the way Maria treated Dougie. I realize his character was a means to an end in the overall story, but the poor guy really gets the dumped on. Perhaps he will get his redemption story in the future.

Veritas was full of steam, like uber hot steam. It also had a lot of family and other tie ins to past storylines. I’m fairly new to A.L. Woods so the characters weren’t old friends to me, but I wasn’t lost either. This can be read as a complete standalone.

𝐀 𝐬𝐭𝐞𝐚𝐦𝐲 𝐞𝐧𝐞𝐦𝐢𝐞𝐬-𝐭𝐨-𝐥𝐨𝐯𝐞𝐫𝐬 𝐬𝐢𝐧𝐠𝐥𝐞 𝐝𝐚𝐝 𝐫𝐨𝐦𝐚𝐧𝐜𝐞 𝐟𝐫𝐨𝐦 𝐛𝐞𝐬𝐭𝐬𝐞𝐥𝐥𝐢𝐧𝐠 𝐚𝐮𝐭𝐡𝐨𝐫, 𝐀.𝐋. 𝗪𝐨𝐨𝐝𝐬…⁣
⁣
𝘔𝘢𝘳𝘪𝘢⁣
It was supposed to be a fling.⁣
A one-night stand. ⁣
Then Jordan Kovacs asked for more.⁣
A date. I don’t date—I f*ck. ⁣
While he showered, I left. ⁣
The end. ⁣
Or so I thought. I have a problem.⁣
My ex-f*ck buddy is getting married. ⁣
And I can’t get out of going—long story.⁣
I need an arrangement I can understand from a man who only had me for a night.⁣
But Jordan has other plans for me.⁣
Things that will tip the scales in his favor.⁣⁣
⁣
𝘑𝘰𝘳𝘥𝘢𝘯⁣
A tryst was what she was looking for. ⁣
A date was what I wanted.⁣
A chance. ⁣
I understand Maria Tavares. ⁣
She’s a beautiful lie. ⁣
Now she needs something from me: a favor. ⁣
So I’ll function in a way she can understand: an arrangement. ⁣
Three months. ⁣
All in. Strings attached. No interferences. Titles exchanged. ⁣
The plan is simple, with only one rule—veritas.⁣
Let’s see if Maria’s ex-f*ck buddy understands that, too.