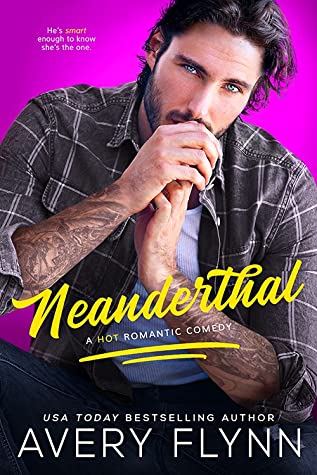 Neanderthal; Last Man Standing #2
(A standalone within a series)

This second book in the Last Man Standing series is my absolute favorite! Avery Flynn is known for her adorable humor mixed with smexy good times, Neanderthal is all that mixed with Legos, smart grunts, and southern sass.

Griff Beckett is the quiet cousin, known more for grunting or one word responses than he is for his deep conversation skills. That doesn’t mean he isn’t extremely intelligent. He usually has several projects in the works or fires to put out at work and to relax he likes to assemble 3000 piece lego sets. That’s to relax! The man’s mind is constantly on the go, but when he first heard Kinsey’s voice, or more importantly when he heard her solve multiple issues all at the same time, Griff instantly fell in love.

When Kinsey Dalton meets Griff, she’s stuck by how attractive he is, but then he says the one thing she dislikes. He puts her in a box just like everyone else and dismisses her based on her looks. She may be pretty and blonde, but she has a brain in her head, however, it doesn’t take long to notice that Griff may be sitting in his own box. He’s smarter than he allows people to believe. There is something there and she likes the gruff man, there is only one other problem. Her fake fiancé, Todd. Now, she just needs to kill him off, maybe her Meemaw has some ideas on how to go about that.

These two are adorable, brainy, quirky, and just darn likeable. Griff may find himself at a loss for words, but Kinsey understands him better than anyone right out of the gate. That’s destined love right there. He also finds her brain the most attractive feature on her, which is super hot. These two have wicked chemistry, but have a lot of roadblocks to finagle making this romcom just too cute. It’s a big win for Avery Flynn in my book.

So I may be in the Last Single Man Standing competition with my cousins, but five minutes around Kinsey was all it took to take myself out. Who cares about bragging rights when you’ve just found the woman you’re going to marry? Sure, she may work for my biggest competitor. Sure, she’s not dating right now. Sure, she’s my sister’s best friend and I’ve been sworn off her. But somehow she agrees to go on six fake dates to help me save face in this competition.

What does the guy who never uses his words have to say to convince the girl of his dreams that they’re perfect for each other?