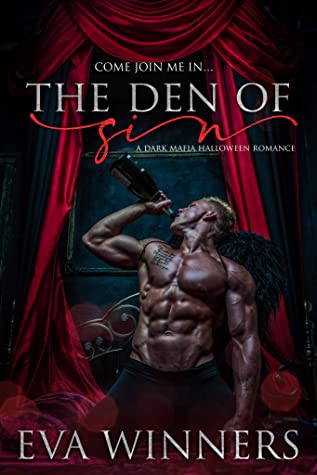 Den of Sin; Belles and Mobsters
(A prequel-standalone to a new series)

The Den of Sin starts off with a sinful bang!

Vasili Nikolaev is the head of the Russian syndicate in NOLA, a spot he inherited when his father passed. Nothing he exactly mourned, but I get the feeling that is the general consensus in these mafia families. The tough exteriors and hard lives make it tough to be liked, even within their own bloodlines.

There is a huge age gap between Vasili and Isabella, but that doesn’t stop her from wanting the man, the brother of her best friend and college roommate. While Isabella never makes her feelings known to her friend, Vasili is well aware that the young woman wants him and uses it to his advantage.

There is a long standing feud between their families, one that Isabella has no knowledge of, but one that Vasili easily takes his revenge out on because of Isabella’s crush on him. It’s one he regrets years later, but one that may be too late.

Five years pass and they reunite, much to Isabella’s dismay, but as the story goes on, we realize that escape may have never been possible to begin with.

This plot is mixed and twisted with lots of families and introductions to lots of players in the Belles and Mobsters series that is coming up in the coming months and new year. While there is talk of dark play, it’s all talk and no action, not to say their steamy moments aren’t hot, but it’s not full on D/s.

With some plot threads left open, most likely to tie up in other books, and perhaps I was looking for a little more sinning in the den, this was a 4.5 read for me. Vasili Nikolaev.
Dangerous. Deadly. And most of all, devastating.

He’s the king of New Orleans.
Ruler of the Russian mafia and my best friend’s oldest, mouthwatering brother.

On Halloween night my last year in college, I gave him everything. My body. My heart. My soul.

He burned it all to the ground with the first ray of dawn.

Lessons learned. I’ve moved on. Now, five years later, I have a career I love, a boyfriend. But Vasili is back in my life again. A temptation I don’t need.

One thing is for certain. Nikolaev always settles the score.

He’ll destroy everything and everyone, including my boyfriend.

The question is… What is Vasili’s end game? Will he destroy me all over again or will I be the Phoenix rising from the ashes he left behind and take what I’ve always wanted? Him.

1 thought on “Review – Den of Sin by Eva Winners”