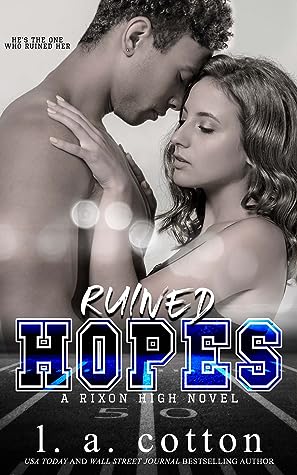 Ruined Hopes; A Rixon High Novel #3
(A standalone within a series)

Bring on the water works. Super angsty with a super slow burn romance burning the entire time. Ruined Hopes will test your drama limits while pulling on every heart string.

Ezra Bennet is a foster child that came to live with the Bennet family when he was eleven years old, but the damage to Ezra’s emotional and social skills were already damaged. However, Ashleigh Chase saw something in the lost boy and never once gave up on wanting to be his friend, until they were older and those feelings changed, at least on her side, into something more.

Ashleigh wakes up in a hospital with the last school year gone from her memory. The car accident she was in caused a TBI taking those memories and her entire world to shift and change. As she watches all of her friends leave for college she’s stuck repeating her senior year of high school along with the boy who also has changed over night. Ezra was never easy, but he has become almost cruel in pushing her away. Ashleigh’s life has already changed so much it truly breaks her heart to lose the one person she thought would always have a special place in her heart, but perhaps it’s time to finally give Ezra what he wants…freedom.

Ruined Hopes is a slow, slow burn. Trust me, the water works will fall when Ashleigh and Ezra get to the heart of the matter so don’t throw your book in the build up to get there. Their love is worth the struggle.

The family dynamics, the friendships, the entire struggle for everyone involved in both of their lives…it’s all gut wrenching and beautiful at the same time. It’s a wonderful addition to the overall series and lovers of the Rixon world will really enjoy it.

But when she wakes up in hospital with no memory of how she got there, her bright future dissolves around her.

Ezra Bennet has always felt like the odd one out.

But this time, he really screwed up and he has no choice but to face the consequences.

Forced to retake their senior year, Ashleigh turns to Ezra only to find him cold and cruel and determined to keep her at arm’s length.

He’s the guy she always wanted.
She’s the girl who was never good enough for him.
But now there’s a secret between them, one that she’s determined to uncover.

She thinks she can save him. But she doesn’t realize yet…

He’s the one who ruined her.