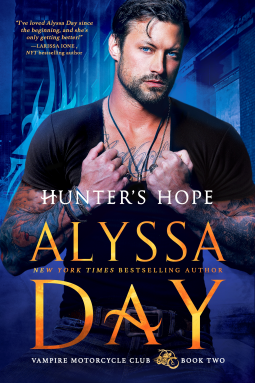 Full of paranormal beings, humor, and a love for animals.

Hunter Evans is an everyday hero. He was a firefighter until the night he died, only to be reborn as a vampire. Hunter never loses that instinct to want to save others. Even though he now thirsts for blood, he refuses to give in to hurting others to get it, even when that thirst wants to over take him. Hunter is sweet and adorably cute in learning to be a new vampire. He’s full of questions and while he’s grateful for another chance at life, he also struggles with the morality of it all. The person who helps him with it all isn’t another vampire, but a ghost whisperer named, Alice.

Alice Darlington originally mistakes Hunter for a ghost when she firsts meets him, given his recently dead status. She has a gift for talking to ghosts and animals, which is why her first job is running an animal shelter and she only takes appointments for handling ghost problems. So when Hunter comes back to see her…well it’s all very cute because it’s not an appointment day.

These two are adorable in their awkwardness. Hunter is not only figuring out how to be a new vampire, he’s also not had a ton of dating experience since he is the nice guy who always gets friendzoned. Alice is also in the same boat with zero dating experience, so to watch them figure it out together makes this romance extra fun.

On top of the paranormal aspect, there is the continuing mystery of who is trying to kill the paranormals and with that there is a demon sent to spy on them who ends up being both comic relief and a source of comfort.

I like that these books continue to build upon each one, so while I was disappointed that Alice’s powers were only scratched at the surface, I’m hoping they will be flushed out in later books, as Ryan’s powers have grown more since book one and we got a lot more of the werewolves in this book as well.

Hunter Evans risked his life again and again as a firefighter until the night he died saving a child…only to be reborn as a vampire. Now the man who lived his life as the quintessential “nice guy” must find a way to conquer the deadly urges that threaten to turn him feral. When his own actions put a beautiful woman in danger, he vows to protect her…even from himself.

Alice Darlington has a secret of her own: she sees ghosts. She thought she’d done a good job of keeping it under wraps—until now. A terrible threat from her past is hunting her down in order to use her power for dark purposes. Now she’s on the run and doesn’t know who to trust or where to go.

When Hunter and Alice team up to battle the dangers coming at them from all sides, they’re forced to rely on each other. But Hunter doesn’t know how long he can keep the beast inside him away from the woman it craves…