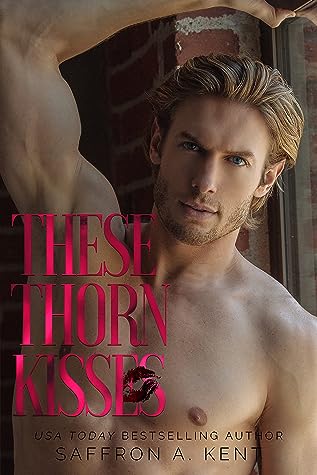 These Thorn Kisses; St. Mary’s Rebels #3
(An interconnected standalone within a series)

The absolute, unrequited, torturous angsty feelings…this is the very essence of These Thorn Kisses. So. Darn. Good.

To understand the circle of Bronwyn’s life and how she ended up at St. Mary’s School for Troubled Teenagers and the man who set her free to really be herself…well, it all boils down to the inspiration of the same man. Wyn was never allowed to be herself in the presence of her parents and she was forbidden to show anyone her talent, much less pursue her skills. One act of defiance, a very public act of defiance sent her to St. Mary’s after meeting a stranger who encouraged to be herself. A stranger who was none other than Conrad Thorne. The brother of the girl who would become her best friend once she started attending St. Mary’s. A school that ironically Conrad hated sending his own sister to after her own outburst of defiance, but that is another story.

Fate has a twisted sense of humor for these two. Bronwyn never thought she’d see her stranger again, she never even knew his name, but when Conrad took a job at St. Mary’s as the new soccer coach, it seems fate finally intervened.

It was never Conrad’s intention to pursue a student. It certainly wasn’t why he took a job at his sister’s school. Conrad is stable, predictable, sturdy, dependable. He would never break the rules and pursuing a relationship with a student falls into those rules of what everyone thinks of him. He also wonders why his ex-girlfriend, the woman who is now married to another man, thinks that he would delve into an affair for these very same reasons, the temptation is there, but with whom?

The angsty, yearning emotion is really good in this story. There is a lot at stake for this couple, more than just their emotions, and the deeper they get the more complicated things become.

What I’ve loved as this series has progressed is the relationship between the girls; Wyn, Callie, Salem, and Poe. There is a deeper understanding of how they’ve each arrived at St. Mary’s, what brought them together as friends and more importantly what’s kept them together through their rough times. I also love that St. Mary’s is a reform school, but for each of these girls it has been a safe haven from whatever outside chaos they needed to escape from.

Conrad has been dependable for sooooo long he doesn’t know how to let go and let someone else care for him. Wyn desperately tries and wants to care for him, but trying to find a crack in his armor is near to impossible. However, if anyone has a chance, perhaps the young artist can capture his essence and show him how much he is truly loved.

Also….Conrad Thorne is a dirty, dirty talker (so hot) and Wyn Littleton is sassy and absolutely perfect for Mr. Thorne.

Eighteen-year-old, Bronwyn Littleton is in love with a stranger she met on a summer night a year ago.

That’s all she knows about him though.

Until she runs into him again. At St. Mary’s School for Troubled Teenagers – an all girls reform school – where she’s trapped because of a little crime she committed in the name of her art.

Now she knows that her dream man has a name: Conrad Thorne.

She knows that his eyes are way bluer and way more beautiful than she thought. And that his face is an artist’s wonderland.

But she also knows that Conrad is her best friend’s older brother. Which means he’s completely off-limits. Not to mention, he’s the new soccer coach, which makes him off-limits times two.

What makes him off-limits times three however, and this whole scenario an epic tragedy, is that, Conrad, Wyn’s dream man, has a dream girl of his own.

NOTE: This is a STANDALONE set in the world of St. Mary’s.