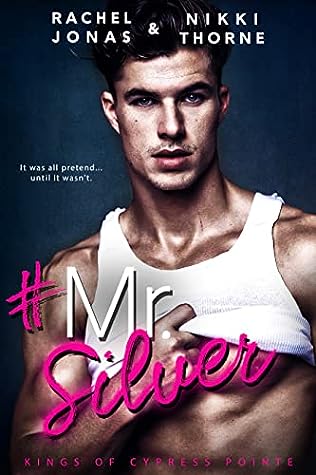 Mr. Silver; Kings of Cypress Pointe #5
(A standalone within a series)

From the very beginning of this series, I never thought that one of the Golden siblings would replace top ranking of the other, but with each subsequent book it’s happened. Sterling and Lexi have not only joined the ranks with the other Golden couples, their story has turned out to be one of my favorites.

Fake relationships AND enemies to lovers are two of my favorite tropes and Mr. Silver has both. Reading this fantastic book was like diving into my favorite foods. Once I start I can’t stop, it’s yummy and delicious, leaving me full and ultimately satisfied with that high feeling and always wanting more when I’m barely done. That was me reading this entire book. Start to finish, I couldn’t put it down, laughing, sighing, and loving this couple through to the very last page.

Lexi Rodriguez is a total spitfire from the very beginning. She doesn’t budge an inch allowing Sterling into her emotional circle. Does she use his situation to her advantage…oh yeah she does, which I absolutely adore about her. Lexi is no wallflower to the ultimate Golden boy of Cypress Pointe, but I also love that she softens along the way, allowing Sterling to view the sensitive woman underneath that tough exterior she always wears. That girl has all been but extinguished inside her and Sterling has the rare advantage to know the real Lexi without abusing that privilege.

Sterling finds himself in a pickle and the only person able to pull him out of it just so happens to be the one girl who hates his guts. Sterling and Lexi, frenemies at best, form a fake relationship to help Sterling out of said pickle and while on a good day these two hold their animosity at arms length at best, they now have to look like they are dating in the public eye. How will they ever pull this off?

Understanding, appreciation, and emotional support go a long way in building what was broken between them, and while neither was looking for something long term out of this fake relationship (they were honestly just hoping not to kill one another) things changed that neither one of them ever saw coming.

I think what I loved most of all is that neither one of them originally went into this fake relationship with nefarious plans set to destroy the other one, but as their relationship grew organically they also didn’t run and hide.  Both Sterling and Lexi were a beautiful surprise to this fantastic series and like I said above, this book was like enjoying one of my favorite meals. Totally delicious! Sterling Golden—Cocky football star. Rich Playboy with a secret. Guy I’d most like to throat-punch. The cherry on top? I’m stuck pretending to be this d-bag’s girl for the next few months.

When I spotted him sneaking out the Dean’s window—a woman whose reputation precedes her—I could’ve minded my business. But it’s not every day you catch your nemesis in such a compromising position, so I did what any self-respecting person would’ve done.

I added fuel to the scandal that ignited, then laughed while the cops hauled him off in nothing but handcuffs and his boxers.
Of course, the arrogant prick found a way to rope me into the lie that got him out of trouble. Which means the only way I come out of this unscathed is to go along with it, pretend we’re a thing.

Most girls would kill to be on the arm of a Golden triplet, but I’m counting down the days until it’s over. In public, we give the city the show they crave—a chance to witness their local bad boy falling in love. But when we’re alone, the gloves come off and we give each other hell.

Only, who knew exchanging insults and cruelty could feel a bit like… foreplay?

There’s an expiration date on this arrangement, but as we turn up the heat to convince our city this “relationship” is the real deal, Sterling and I sometimes forget that it isn’t. He might think his recent fall from grace was a disaster, but if he makes me regret this, I swear I’ll make his life a living hell.

Fool me once, shame on you. Fool me twice… your belongings might mysteriously catch fire.

Consider this your final warning, Mr. Silver, because it’s the only one you’ll get.

***
Mr. Silver is a full-length standalone novel (roughly 100k words). This book can absolutely be read on its own, but for the sake of flow and clarity, it’s recommended that you start with THE GOLDEN BOYS (a bully romance trilogy within this series), then move on to PRETTY BOY D (a friends-to-lovers standalone).

Do you love the frustratingly hot push and pull of a good enemies-to-lovers romance? Then you’ll love getting to know Sterling and Lexi in MR. SILVER. Due to adult themes and sexual situations, this one’s only for the 18+ crowd. Find more of my reviews on Amazon under Kayreader

on Goodreads under Kay Daniels Romance