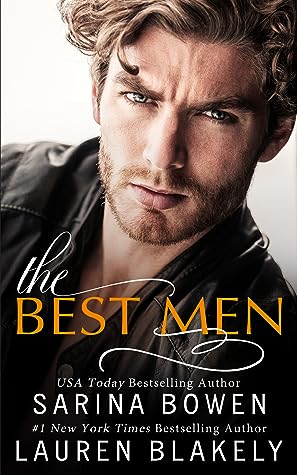 The Best Men
(A standalone)

Panty melting hotness mixed with giggle out loud laughter. The Best Men combined the best of both worlds which made for utterly divine reading.

The powerhouse duo of Blakely and Bowen absolutely blew the roof off this book!! From beginning to end I couldn’t put the story down. Yes, this book was hot, pure molten lava fire HOT! But, these boys, sorry men, were also flushed out, well developed and supremely well written that I was right there living every moment with them. I was completely immersed in their world and never wanted to leave.

Mark Banks is a single, divorced father. He works on Wall Street in a high pressure job and he’s the main caregiver to his 6 year old daughter. It doesn’t leave a lot of time or basically any time for dating or relieving the stress of his life. He’s not bitter about where he is in life, per say, he just never thought he’d be single with his only companion being his hand late at night dreaming of wicked fantasies he’d one day like to have that didn’t involve just his palm and five digits as dates. When Mark meets Asher St. James, a man who exemplifies the single bachelorhood lifestyle, Mark instantly and outwardly loathes him, but also inwardly he wants to mount him and introduce him to his late night activities. It’s very confusing to his steady late night date.

Asher is a fun, former athlete – now professional photographer. His smooth personality wins everyone over, everyone except Mark Banks. Basically Asher’s that guy that everyone in the room likes and he can’t understand why Mark Banks doesn’t seem to like him. Asher shouldn’t take it personally, it really isn’t him per say. Well, it sort of isn’t him. Asher isn’t used to flirting with straight men, but is Mark straight? All signs of his divorce and six year old daughter would say yes, but the very confusing things Mark says to Asher would say otherwise. Don’t take it personally Asher…there is a very specific reason Mark is the way he is…Lucky for both of them, a week in Miami planning a wedding for Mark’s sister and Asher’s best friend should help clear things up, or at least clear out Mark’s excel spreadsheet. Bestselling authors Sarina Bowen and Lauren Blakely team up for the first time in an enemies-to-lovers, opposites-attract, irresistibly sexy standalone romance between the best man and the other best man!

In my defense, I was left alone with a bottle of single-malt and a life-long penchant for protecting my baby sister. Still, that’s no excuse to send ten drunk-texts on why her hasty marriage would be a mistake.

If only I had just texted my sister. But nope. I accidentally sent the message to her, her groom, and his super hot wingman.

I also used the phrase “super hot wingman,” so I’d like to die now.

Instead, I have to plan a wedding with the aforementioned hottie and share a too-small guesthouse in steamy Miami.

Three days in the sun with the cocky, charming former athlete who likes to push my buttons? Fine, two can play at that let’s-infuriate-each-other game.

Until Asher ups the stakes with one wildly sexy suggestion. A no-strings fling, then I go back to my single dad life in New York, and he returns to his star-studded one.

But the more nights I spend with the other best man, the more I want days too, and that just can’t happen. Especially when I find out the real reason why…