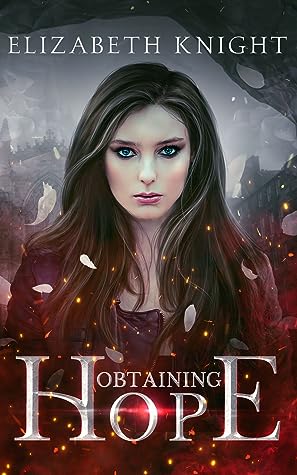 The dramatic conclusion to a RH, shifter series.

This was my first Elizabeth Knight book. I know….I started at the end of a series, but I easily caught up to the plot of what Viv and her mates were facing and felt the love she shared with all seven (YES, seven) of her men. That would be a lot of laundry to clean, but these men are werewolves and they bust out of their clothes when they shift, sooooo laundry problem solved.

In this final book of the Hope Series and there is a lot of suspense and action. Tracking down the enemy to finally achieving peace takes not only Viv and her seven mates, but the help of wolves throughout the country. This is the time that Viv’s Dama really comes shining through.

Is any of this story plausible? This is a paranormal story, so absolutely not, but there were scenes that certainly had me thinking, even with their paranormal abilities that this group would have needed more time in planning the big attacks that they did. That is truly my opinion and I’m sticking with it.

There are moments that could be sensitive for some readers, regarding motherhood and loss of life, but this is also a fantastical world so I feel Elizabeth kept that in mind when writing those bits.

This is a series that is best read in order, but I did jump in right at the end and enjoyed the final book to this werewolf world.

The time has come to end this.

No longer will I hide away locked in my own sorrow. Instead, I will channel that pain into righteous fury. Once again I’m reconnected with my mates, and with new allies who have been dealt the same ruthless hand as me— finally have the army I need.

The call has been sent out for those who want their pound of flesh to come together.

My enemy isn’t going down without a fight. Every move we make, they follow it up with one of their own. What they don’t know is that with each attack, I gain the knowledge I need, that will aid me in taking them down. We know where they are hiding, and we know the cruel things they’re still doing to those they claim to protect. That just fuels my thirst for vengeance.

This battle will end in one of two ways—their death or ours—and I don’t plan on dying anytime soon.

This is a medium burn reverse harem where the leading character will not have to choose between her men. It is an 18+ book that has strong language, sexual situations, along with darker material such as torture, violence, and some matters pertaining to the fragility of life.

Part of a series, best read in order:

Start the duet with Suffer in Silence!

The second she’s out the door, Kage is already heading toward me. “What the fuck was that, S?”

It takes everything in my power to hold back my smile, amused with how possessive he is. “I don’t know. She’s determined to become my friend.”

“And you’re okay with that?”

I shrug half-heartedly. “She’s…tolerable. And besides, it’s not like I can go out and find new friends, being dead and all.”

He stares back at me before shaking his head. “No. Nope. I don’t like it.”

Giggling, I stand up and walk toward him, dipping my fingers into his pockets. “I can’t spend the rest of my life with just you and Beni.”

He cocks a single brow at me. “Who the fuck said Beni is invited?”

Arching up on my tippy-toes, I press a kiss over his heart. “Because they keep me from wanting to kill you in your sleep.”

His hands land on my arms, and he moves me away from him so he can look down at me. “How many times have you considered doing that exactly?”

I tilt my head side to side. “Give or take a few.”

“Saxon!” he groans, his amusement slipping through.

“What?” I ask innocently. “You’re a little insufferable sometimes.”

The corners of his mouth raise as he stares down at me. “Mm-hm. Great. I’m sleeping in the panic room from now on.”

A laugh bubbles out of me as I press my lips to his. “That’s probably smart.”

When the baby-making ends will something else begin?

New Year’s Resolution:
Have a baby
Preferably with Josh Lewenthal

Meet Gemma Jacobs. She’s driven, energetic, and a positive thinker. She has a great career working for famed self-help guru Ian Fortune, she lives in a cute studio apartment in Manhattan, and her family is supportive and loving (albeit a little kooky). Her life is perfect. Absolutely wonderful.

Except for one tiny little thing.

After a decade of disastrous relationships and an infertility diagnosis, Gemma doesn’t want a Mr. Right (or even a Mr. Right Now), she just wants a baby.

And all she needs is an egg, some sperm, and IVF.

So Gemma makes a New Year’s resolution: have a baby.

Josh Lewenthal is a laid back, relaxed, find-the-humor-in-life kind of guy. The polar opposite of Gemma. He’s also her brother’s best friend. For the past twenty years Josh has attended every Jacobs’ family birthday, holiday, and event – he’s always around.

Gemma knows him. He’s nice (enough), he’s funny (-ish), he’s healthy (she thinks) and he didn’t burn any ants with a magnifying glass as a kid. Which, in Gemma’s mind, makes him the perfect option for a sperm donor.

So Gemma wants to make a deal. An unemotional, business-like arrangement. No commitments, just a baby.

They have nothing in common, except their agreement to make a baby and their desire to keep things businesslike.

But the thing about baby-making…it’s hard to keep it businesslike, it’s nearly impossible to keep it unemotional, and it’s definitely impossible to keep your heart out of the mix. Because when you’re making a baby together, things have a way of starting to feel like you’re making other things too – like a life, and a family, and love. And when the baby-making ends, you wish that everything else didn’t have to end too.

Add Josh and Gemma Make a Baby to Goodreads: https://bit.ly/3kSrkAT

About Sarah Ready
Author Sarah Ready writes contemporary romance and romantic comedy. Her books have been described as “euphoric”, “heartwarming” and “laugh out loud”. Her debut novel The Fall in Love Checklist was hailed as “the unicorn read of 2020”. She loves to write fast-paced, emotionally compelling romances about quirky, smart women and the men who love them.

Before writing romance full-time Sarah had lots of fun teaching at an Ivy League. Then she realized she could have even more fun writing romance. Her favorite things after writing are adventuring and travel. You’ll frequently find her using her degree at a dino dig site, crawling into a cave, snorkeling, or on horseback riding through the jungle – all fodder for her next book. She’s lived in Scotland, Norway, Portugal, Switzerland and NYC. She currently lives in the Caribbean with her water-obsessed pup and her awesome family.
You can visit her online at www.sarahready.com