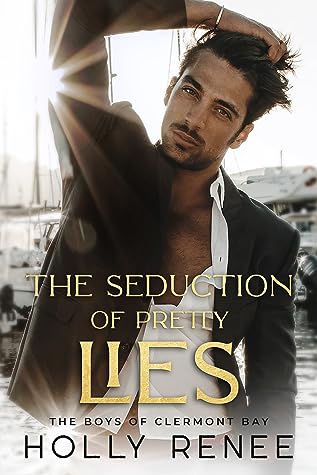 The Seduction of Pretty Lies; The Boys of Clermont Bay #5
(#5 within a series)

Everything I’d hoped for in this newest addition to the Clermont Bay series and sooooo much more!!

It is all the newfound excitement found in first touches and kisses, stolen moments and secret getaways. When your heart races with across the room glances and light finger touches. Holly Renee doesn’t miss a moment of this all consuming passion that burns between Olly and Frankie while making it leap off the pages.

What Olly and Frankie feel for one another is a temptation that has been smoldering between them for years. That smolder burned right off the pages and kept me reading late into the night. This book was everything I’d hoped for and more.

Their secrets and lies had my heart beating so fast…oh my gracious, by the end I thought my heart was going to beat out of my chest!!

This is Olly and Frankie! These two need each other like they both need air, but so much stands between them. Family, friends, the entire US.There are so many layers and obstacles, but will their love conquer all of it?

Olly and Frankie had been friends for years, while Olly had also been Frankie’s protector and sort of surrogate older brother while growing up, Olly’s feelings began to change as they rounded into their teenage years. However, since Olly was best friends with Frankie’s brother, Beck, he wasn’t about to throw that away, especially after Lucas’ attack on Frankie. Lucas obliterated everything between them and Olly wasn’t going to make that same mistake. Beck and Frankie were too important to him to jeopardize throwing away years of friendship. These people were basically his family.

Frankie refused to live in the shadow of being the broken girl forever. She didn’t want what Lucas did to her to define her for the rest of her life. She didn’t know when it changed, just that it did, her feelings towards Olly went from brotherly to lust filled over time. She never thought he felt the same until the summer before he was ready to leave for college. By then it was almost too late. Frankie decided to take the last few weeks of summer and gain back control of her life and stop being the pity girl and finally start living. That choice will either be the best decision or crush everyone in her path.

This is just the first part of the duet and I’m dying until the next part. Find me on my deathbed waiting to be revived.

Devoted. Loyal. Shameless. The Boys of Clermont Bay had been my protectors for as long as I could remember.

And Olly Warner took the job to heart.

He was intense and all-consuming, and I had been in love with him for years.

Alarmingly handsome and recklessly charming, he attempted to deny there was ever anything between us.

But we slipped over that invisible line, and the moment we gave in, something fractured.

He was leaving regardless, and I couldn’t hang on tight enough for the both of us.

Olly had always been the boy I could never have, but I couldn’t help losing myself in him.

A searing affair, the guarantee of a broken heart, and the desperation of careless promises.

Olly and I were never meant to be, and we had become nothing more than a pretty lie.