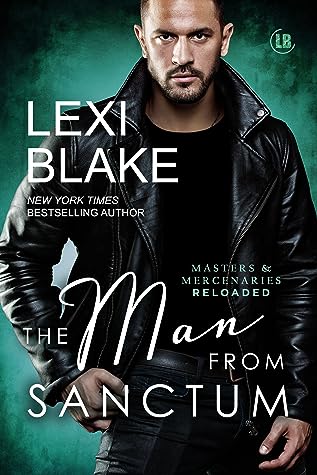 The Man From Sanctum; Masters and Mercenaries Reloaded #3
(An interconnected standalone within a series)

I barely see Lexi’s name and know without a doubt that I will fall in love with what’s coming, but this latest book really touched me to the core. The characters, the plot, the full articulated writing and depth of emotion tugged at my heart in a way that left a stamp on my soul.

Deke and Maddie were high school sweethearts (that could be part of the appeal, I love a good sweetheart-second chance romance), but unlike my own story, these two lovers lost touch for almost two decades. That is sad right there, but during all their time apart, they never once forgot each other, keeping in touch in their own way, through the small town grapevine and various family members, but never once actually seeing each other until Maddie needs Deke’s services.

Maddie is a brilliant tech scientist and while her tech could help revolutionize the world, she has come to believe she’s working for an evil billionaire. With little to go on, but a lot of suspicion, she goes to the one person she trusts, the man who broke her heart years ago.

Deke works for McKay-Taggart with the best operatives in the world. While Maddie may have brought them little information to go off of, he works with the best men and women in the world. However, there are complications surrounding the billionaire, so going undercover to find out if the man actually is evil like Maddie believes, well… it’s going to take a different approach.  A D/s approach and no one is going to top Maddie besides Deke.

This was truly the second chance romance that I needed in my life. Whether you need a boost at love, at life or just to get motivated, this book touched on something that sparked that inner joy or passion that’s been missing or rekindled inside of me.

As for the overall series, it brought old and new parts together in a fresh new light. Long time fans will love rekindling with characters and new readers will enjoy everything that Lexi brings to this story. A wonderful hit!

2 thoughts on “Review – The Man From Sanctum by Lexi Blake”