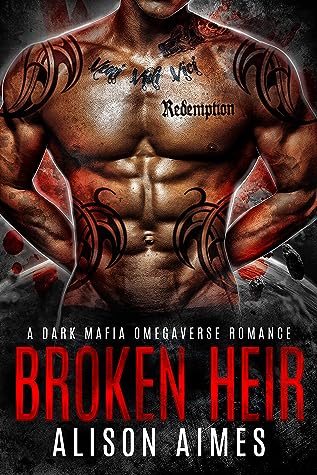 Broken Heir; Ruthless Warlords #3
(A standalone within a series)

Alexi Skolov is on a mission. He’s been tasked to find his missing brother and he’s currently in the desolate region of Sartin. A burnt out terrain where the sun will scorch you if you are caught out in the sun’s rays. This world isn’t for the meek and it breaks Alexis’ heart knowing his lost brother could have ended up here when he was kidnapped almost sixteen years ago. To even enter this dark world, terms had to be met, Alexi has been promised to one of the omega’s. So while he was originally hoping to only leave with his brother, he’ll also be leaving with a mate. That was a term he never saw for himself, especially considering his condition.

Keira Sartin has been put down and told she’s worthless most of her life. While she realizes that omegas serve their purpose, she realizes that her lack of gift and ability to produce an heir makes her less than other omegas. However, she’s never let it get in the way of helping others. She uses her intellect and kindness to help the underground movement and helps omegas escape the abuse and omega trading right from under her uncle’s nose. While he believes she’s worthless and unnoticeable, she uses that fact against him at every turn.

Alexi and Keira may have never met under normal circumstances, but fate has a way of working out. These two souls have felt broken and worthless their entire lives, that is until they meet and realize that together they are worthy. Together they can achieve anything. Together they can see each other’s potential, which truly strengthens their inner qualities. Qualities that they used to believe were weaknesses. Their story is full of passion, but more than that it’s one of building self esteem, inner beauty from believing in yourself, and loving yourself so you can love someone else.

There were moments where their brokenness is emotional, but the strength they draw from one another is so beautiful I couldn’t help but feel their love pour off the page and don’t get me startled on their passion. Whew! Hot! Hot! Hot!

Also, Keira’s cousin, Maddox, is an amazing secondary character, but that’s all I’m saying about him for now.

I love this entire omegaverse world, but Alexi and Keira may be my favorite couple yet.

What is the one thing a sinner can’t allow?
Temptation.
But Keira Sartin is all that and more.
A walking, talking dream. She calls to every cell in Alexi’s messed-up, rule-breaking soul.

Except she’s forbidden.
Addictive.
A distraction he can’t afford.

Not when his family is depending on him and redemption is within reach.
Not when his mission hinges on making no waves and fulfilling his duty.
Not when she’s the sister of his bride-to-be.

What’s the one thing a troublemaker can’t afford?
More trouble.
But Alexi Skolov is all that and more.

He’s also up to no good. Which means he’s not for her.
She has her own objective to fulfill and he’ll only get in the way.
He’s also promised to her sister.

It should be easy for them both: just stay away.
But running from temptation is hard. Avoiding trouble even harder—and sometimes it catches up to you, leaving you…
breathless,
begging,
Broken.

“WHAT REALLY HAPPENS IN VEGAS…“

What I meant to do in Vegas: Let my hair down for once and celebrate winning a medal at my first women’s hockey all-stars competition.

What I actually did: Got senior prom drunk and woke up married to Brooklyn’s star winger, the great Neil Drake.

He’s the heir to a billion dollars, and I barely survived my childhood. Our friendship is based strictly only on hockey, takeout food, and smack talk.

And now holy matrimony. Although we both know it can’t last, especially once his evil family gets wind of our Vegas shenanigans…

Sarina Bowen is the twenty-time USA Today bestselling author of three dozen books, including: the True North series, and Brooklyn Hockey. She’s the co-author of Him/Us and the WAGs series with Elle Kennedy. She’s the author of The Ivy Years series, and more!
Are you looking for a friends-to-lovers story or maybe even a secret baby book? You can read a list of Sarina’s books broken out by trope and style.
Need to know what’s coming next ? Get all the latest news on Sarina’s website, and sign up for her newsletter so you don’t miss a book or a deal.

Add Love on the Lake to Goodreads: https://bit.ly/3iU4rfi

She crooks a finger, beckoning me closer. But there’s only six inches separating us. If I take a step forward, my boots will touch her toes. So I bend instead, until my ear is next to her lips, like I’m waiting for her to tell me a secret.
For a moment I consider the fact that I’ve been up and down the stairs to the loft at least a dozen times. The only air circulation in here is from a portable fan, so I’ve been sweating and shirtless for several hours. I might not smell all that fresh.
But that thought disappears when her fingertips drag along my collarbone and I feel the warmth of her breath at the edge of my jaw.
“Aaron.”
Her palm wraps around the back of my neck. So soft. So warm.
I swallow and grind out, “I’m listening.”
Her thumb finds that spot between my ear and my jaw, and she presses, gently at first and then more firmly. Her lips brush the shell of my ear, and she whispers, “Look at me.”
I feel like a marionette, and she’s pulling all my strings. I turn my head toward her, and her lips brush across my cheek, sending a hot shiver down my spine, lighting me up like a pinball machine.
Teagan Firestone is a dangerous woman. Sweet, beautiful, broken, and yet . . . bold and resilient. She’s a lethal combination, and it’s all compounded when those soft lips meet mine.
I don’t even know what’s happening. Well, I know. I’m kissing her. Or she’s kissing me. She definitely started it.
It’s like an explosion. Like an entire warehouse of firecrackers igniting at the same time. I groan into her mouth and wrap an arm around her waist, pulling her flush against me.
Our tongues tangle, and her other hand grips my biceps, sliding up and over my shoulder. She knocks my hat off my head, and it drops to the floor behind me. And then both of her hands are in my hair, sliding through the damp strands, gripping at the crown, angling my head farther to the side. Deepening the kiss.
Dragging it out. 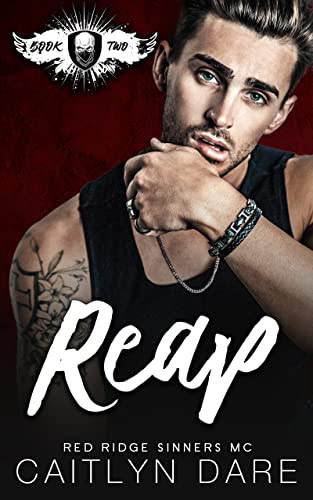 The Red Ridge Sinners MC series from bestselling author Caitlyn Dare continues…
I never imagined falling for a Red Ridge Sinner… let alone three.
But here I am, sneaking around with Diesel, Zach, and Jax, willing to risk the consequences for just one more kiss or touch or moment.
They get me. Understand what I need, and how to make me soar. But every time we find ourselves in the dark, stealing precious minutes together, reality closes in around us.
One of them is broken.
One wants to do the right thing.
And one of them refuses to admit what I already know. I’m willing to fight for them… All of them.
Even if it goes against everyone’s expectations of me. Even if it upsets the people I love.
Even if it makes me a target for our enemies.
REAP is a full length dark enemies-to-lovers/bully romance. This is a why choose novel, meaning the main character has more than one love interest. It is book one in the series. 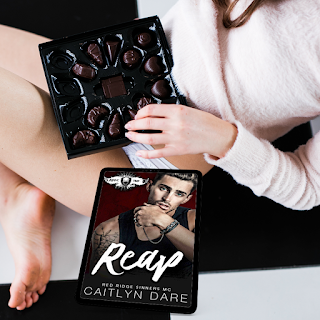